admin
Tyranny will end, when the game is shattered.
A metaphorical world of diabolical wine glasses participate in a sadistic game, which is interrupted by a Puputan style protest, requiring immense self sacrifice. “Pour Games” asks the question: How much would you harm yourself to end a cycle of tyranny? When those in power are destructive of individual liberty, it is only natural that the people withdraw. Their freedom is earned by shattering the tyrannical game at great cost to themselves and their glass heads.

Another installment in the “POUR” Series, set in a metaphorical world of living wine glasses. This story explores a twisted game of power dynamics, where two masters dominate their smaller subjects. The only way to end the game is to force the masters to lose interest. An individual glass accomplishes this by initiating a self-sacrificial rebellion, shattering his own head with his fist. This becomes contagious as the others see the results. They all smash their own heads happily and the game becomes impossible to play. Realizing this, the masters move on. But a new game is quickly reconstituted.. for there will always be a power hierarchy.

Director Bio:
Patrick Smith creates metaphorical hand drawn animated short films, as well as experimental object replacement films. Previously, he was a storyboard artist at Walt Disney, and Animation Director for MTV. Smith is a member of the Academy of Motion Picture Arts and Sciences, and a fellow of the New York Foundation of the Arts. For more information go to http://www.blendfilms.com #patricksmith #pour585 #pourgames #animation

To directly support my work, join this channel!
https://www.youtube.com/channel/UCkpnHueBiSqZ1kmIXxAdE6w/join 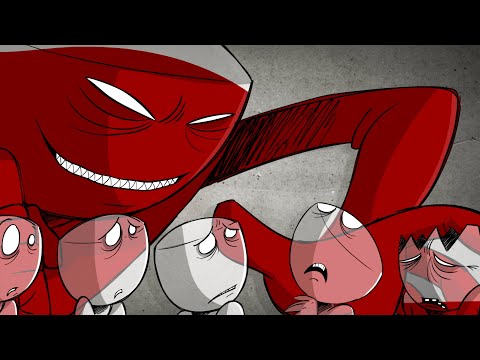 Tyranny will end, when the game is shattered. A metaphorical world of diabolical wine glasses participate in a sadistic game, which is interrupted by ...