10 Cartoons That Pretend To Be Animes

admin
Cartoons That Are Actually Anime

The line between cartoon and anime has blurred more than ever in recent years. With the rise of anime lovers over on the Western side of the world reaching unimaginable heights in the last few years, it’s clear that the world is in peak anime-loving form. And that’s evident in American cartoons as well, with all the great ones seemingly having a substantial anime influence to them. Some of them are more subtle than others, but it’s amazing how many of our favorite cartoons are actually styled off of anime, be it with their art style, their characters or their storylines.

Fan-favorite shows like Avatar the Last Airbender or Samurai Jack have been praised for its anime and asian influence in its themes and art style, while other goofy shows like Teen Titans seem specifically modeled after other anime with its character designs. And then you have something like The Powerpuff Girls, which captured the spirit of anime so much, that after its release, there was an actual anime produced called Powerpuff Girls Z that was based off of the show.

Today’s video will cover all the cartoons that are pretending to be anime, because really, why wouldn’t you want to be an anime? Check out our list below and don’t forget to leave a comment after you’re done, telling us which cartoons you think are actually anime in disguise and don’t forget to hit that subscribe button once your done! Thanks for watching!

10 Cartoons That Pretend To Be Animes 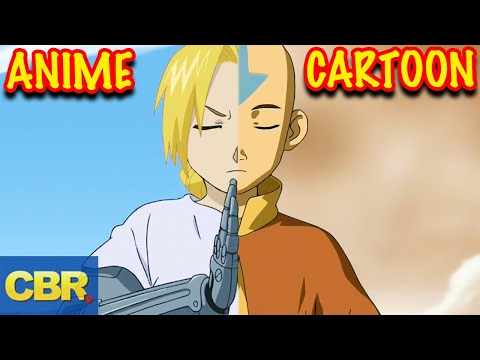 Cartoons That Are Actually Anime SUBSCRIBE NOW to CBR! Click here: http://bit.ly/Subscribe-to-CBR The line between cartoon and anime has blurred more ...