admin
These two cartoon full episodes of Action Pack are SUPER! Watts, Wren, Clay and Treena search for sneaky dinosaur bone burglars, then the Action Pack shakes off snowballs when Cold Snap arrives and freezes the city. Keep watching to see Treena’s friend Mason make a big mess when he can't control his feelings, then Mason gets ready for his first mission and helps track down a trowel thief. Action Pack is now streaming on Netflix!

About Netflix Jr.:
Welcome to the official Netflix Jr. channel! Where kids can learn, sing and play with their favorite Netflix characters - from StoryBots to Super Monsters and everyone in between.

About Netflix:
Netflix is the world's leading streaming entertainment service with 214 million paid memberships in over 190 countries enjoying TV series, documentaries, feature films and mobile games across a wide variety of genres and languages. Members can watch as much as they want, anytime, anywhere, on any Internet-connected screen. Members can play, pause and resume watching, all without commercials or commitments. 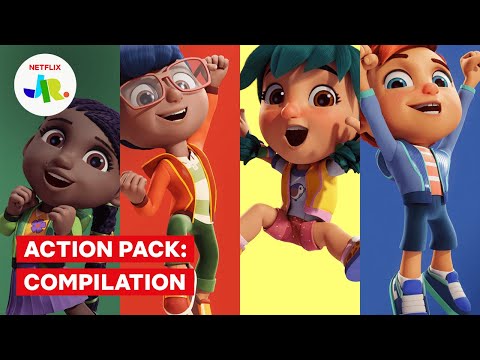