admin
Anacondas 3+4 (2009) Thriller movie explained in Hindi Urdu. The American thriller Horror film “Anaconda Giant '' full parts story summarized with a complete ending in हिन्दी explanation. The plot of Anaconda 3: Offspring is about some people who are looking for giant anacondas in Amazon Lake who become the live bait of this giant deadly monster. Dr. Amanda is shown performing experiments on the anacondas brought to the Murdoch-funded lab. They conduct the experiment on these anacondas, and the lab professor informs Murdoch that the anacondas' powers have been enhanced as a result of the experiments, and when Murdoch checks through the torchlight, the anacondas become agitated and flee. Then they go to the forest to look for those lab anacondas. Here Amanda informs her team that Anaconda's Devours Huge Meal and look like big Monster Snakes. Also she says that the female anaconda is pregnant, so it will give birth to baby anacondas, and they will have powers like them. "But Amanda blasts the factory from which she obtained the anacondas and believes that the anaconda is now dead. Because she has researched that an anaconda can only be dead while burning. Part 3 concludes here.

But in Part 4 i.e. Anacondas: Trail of Blood it is revealed that a baby anaconda was saved. The lab assistant brought it to the lab for experiments, and it was released because it was aggressive. It was later discovered that the lab assistant had created a nursery of the blood orchid flower, as well as a serum. Murdoch wants the serum, so he warns Amanda to bring it for him, and she goes into the lab assistant's house, despite the fact that an anaconda was present. In the end, Amanda brings the serum for Murdoch, but the massive size anaconda attacks him and kills him, and then Amanda kills the anaconda with the oil box with a blast, and she also destroys the nursery of blood orchid flowers, but in the final scene, the anaconda is shown to be revived, implying that it is not easy to end this hybrid, and the movie ends here. 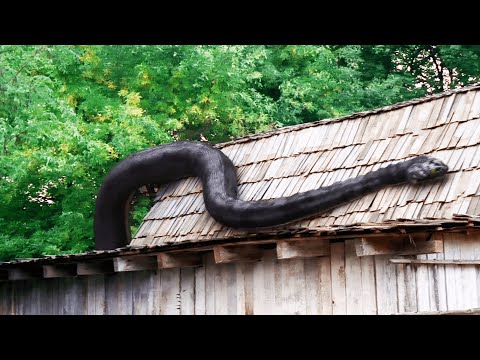