The fictional superhero Batman, who appears in American comic books published by DC Comics, has appeared in various films since his inception. Created by Bob Kane and Bill Finger, the character first starred in two serial films in the 1940s: Batman and Batman and Robin. The character also appeared in the 1966 film Batman, which was a feature film adaptation of the 1960s Batman TV series starring Adam West and Burt Ward, who also starred in the film. Toward the end of the 1980s, the Warner Bros. studio began producing a series of feature films starring Batman, beginning with the 1989 film Batman, directed by Tim Burton and starring Michael Keaton. Burton and Keaton returned for the 1992 sequel Batman Returns, and in 1995, Joel Schumacher directed Batman Forever with Val Kilmer as Batman. Schumacher also directed the 1997 sequel Batman & Robin, which starred George Clooney. Batman Forever and Batman & Robin were poorly received by both critics and fans, leading to the cancellation of Batman Unchained.

Following the cancellation of two further film proposals, the franchise was rebooted in 2005 with Batman Begins, directed by Christopher Nolan and starring Christian Bale. Nolan returned to direct two further installments through the release of The Dark Knight in 2008 and The Dark Knight Rises in 2012, with Bale reprising his role in both films. Both sequels earned over $1 billion worldwide, making Batman the second film franchise to have two of its films earn more than $1 billion worldwide. Referred to as "The Dark Knight Trilogy", the critical acclaim and commercial success of Nolan's films have been credited with restoring widespread popularity to the superhero, with the second installment considered one of the best superhero movies of all time.

After Warner Bros. launched their own shared cinematic universe known as the DC Extended Universe in 2013, Ben Affleck was cast to portray Batman in the new expansive franchise, first appearing in 2016 with the Zack Snyder-directed film Batman v Superman: Dawn of Justice. The film would begin a sequence of further DC Comics adaptations, including Justice League and Zack Snyder's Justice League crossover films featuring other DC Comics characters, and the stand-alone film #thebatman, directed by Matt Reeves, with Robert Pattinson in the role. Affleck and Keaton will both reprise the role of #batman in the upcoming DCEU film The Flash (2022). Leslie Grace will lead the HBO Max film Batgirl (2022), in which Keaton will also reprise his role.

The series has grossed over $4.99 billion at the global box office, making it the eleventh highest-grossing film franchise of all time. Batman has also appeared in multiple animated films, both as a starring character and as an ensemble character. While most animated films were released direct-to-video, the 1993 animated feature Batman: Mask of the Phantasm (based on the 1990s Batman: The Animated Series) and 2017's The Lego Batman Movie (a spin-off of 2014's The Lego Movie) were released theatrically. Having earned an unadjusted total of U.S. $2,783,118,504, the Batman series is the fourth-highest-grossing film series in North America.


Hope you like the video. As always, thanks for watching! 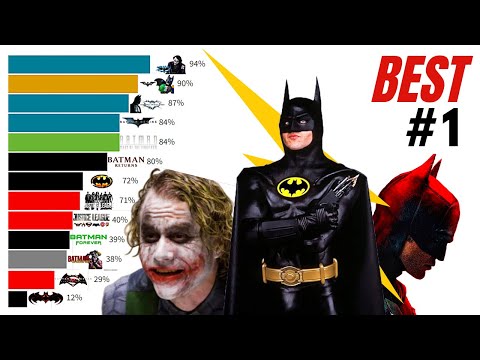