Can You Beat Call of Duty: WW2 Without Taking Any Damage?

admin
From D-Day and the bombing of Hiroshima to the Invasion of Poland and the custody battle for Midway games, no war in human history has come close to leaving the mark on our civilization the way World War 2 did. But as those who saw the horrors of Nazi Germany for themselves fade away, we have turn to video games to keep their memories alive. Can You Beat Call of Duty: WW2 Without Taking Any Damage?

Thumbnail art made by: https://twitter.com/DrubbyBaws

Can You Beat Call of Duty WW2 Without Taking Any Damage? (in text form)

Lemme introduce you to our team. There’s Boone, Donald, Styles with the sweet frames, I’m Daniels, Pierson is the hard ass with a heart of gold, and the real war begins with the landing at Normandy. Nobody on the boat seemed to have any idea what was in store for us, and neither did I. Most of you watching probably weren’t alive back in the 1940s, so I’ll explain the situation, The German’s have eyes on us up in the hills and are using that tactical advantage of height to their advantage. Nowhere is safe. Damage comes from 60% of all directions unless you’re hunkered down behind a thick sturdy piece of cover. This isn’t a PS3 game where you can pull a sneaky, go prone and crab walk across the beach to the seawall without being shot because the AI is so bad. It is, but that’s not important here. If you’re making a run for it, as you are from touchdown to v-day, damage can seemingly come from anywhere. Making the run from cover to cover sometimes brought damage, sometimes it didn’t, no way to tell if it happens until it happens and you can’t kill the machine gunners while you’re on the beach, that would be ridiculous. 10 minutes in, stunned by everyone else’s inability to let me win, I hunkered down behind a dead tank and waited for help that would have a better chance of reaching my skeleton in a week than the person surrounding that skeleton right now.

Like most Calls of Duty, following the arrow on the screen will guide you to the credits at the end of the game, but most games don’t take someone like me into consideration. If this mission had a vehicle section, it would be the worst level of any game I’ve played for a challenge since I attempted Super Monkey Ball 2 without collecting any banana’s. But this level isn’t too bad compared to everything else, it is the first level after all and each level’s got some form of hell to endure. On rails sections with vehicles, tank battles, dogfights, infiltration missions, the worst invisible walls you’ve never seen, I had a lot of fun with this game when it was Call of Duty. In the time spent on the beach, I made it to the seawall a grand total of 3 times.

The first time was a goofy move, I was merely sticking my big toes in the water. The 2nd time, I wasn’t sure if the damage was scripted or not, so I reloaded just to be safe. Number 3, an hour in, having died at least 100 times, I slammed body into the earth like it owed me money, blew open an entrance to Parts Unknown, and could finally get into combat. Now, despite everything I’ve said about how difficult it was to get passed the first quarter of the first mission, enemies are generally either unfairly accurate or borderline blind, but everyone was back in those days. Even me. That’s why I disabled aim assist while playing on console. Did that make it harder? Oh f*ck yeah it did. Was it worth it? Unlikely. It could’ve helped immensely when dealing with these 2 turrets. My initial, gut-instinct ideas never ended very well.

Can You Beat Call of Duty: WW2 Without Taking Any Damage? 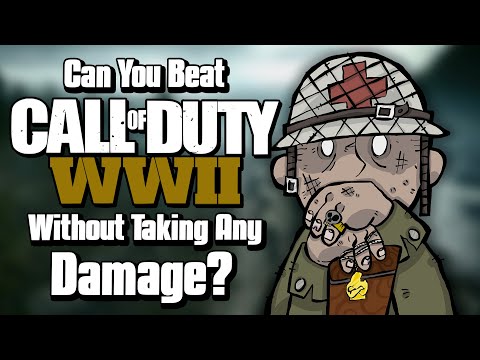 From D-Day and the bombing of Hiroshima to the Invasion of Poland and the custody battle for Midway games, no war in human history has come close to l...