admin
Capture the Flag (2015) Animated movie explained in Hindi Urdu. The American Fantasy animation-Comedy film "Capture the Flag” story summarized with a full ending in हिन्दी explanation. The plot is about a boy 'Mike' who wishes to meet his grandfather but lives a long-distance away. Mike is frequently depressed because he does not understand why he lives so far away. Mike's father and grandfather were both astronauts, and he proudly tells his friend, "My grandfather was on a mission to move to the moon, but he was terminated from the mission for some reason, but he is so talented." A rich entrepreneur is shown who wanted to install a power plant on the moon and raise his flag. He built his own rocket to travel to the moon and was telling the audience about it. He was claiming that Nasa had not yet gone to the moon and that he would be the first to do so. Nasa decides to use its old rocket to travel to the moon, with the assistance of retired astronauts, including Mike's grandfather. Later, Mike and his discovery secretly enter the rocket with his grandfather, but just as he is about to send them out, the rocket door closes.

When they arrive at their destination on the moon, they discover that there is no US flag because the rich man has raised his flag and removed the US flag. Their chameleon steals the American flag, while the rich man kidnaps his grandfather. The rich man had built the plant and was producing Helium gas there. Mike and his friend went there with a camera to record his conversation, and they broadcasted it live. The rich man promises them that he will destroy the world and rule everywhere. Mike saves his grandfather, and their Chameleon steals the flag again in secret. They manage to flee, but his grandfather falls into a deep hole, and the rich man is also chasing them. Mike decides to blow up the rich man's power plant so that he will not harm anyone.

Mike's grandfather tells him why he didn't live with them while he is stuck. Because of their son's illness, he was removed from the mission to the moon, and he later felt guilty and separated. Mike saves his grandfather as well, and they then proceed to blast the plant as they move inside to blast the rich man himself. Because Mike and his friend were inside, the rich man himself blew up the plant. However, the chameleon also saves them here, and everyone is happy. Only Mike, his grandfather, and a friend are shown returning; the rich man is shown alone in space and appears to be lost in the depths. They hugged each other, and Mike's father and grandfather also apologized and hugged each other. This was the film's happy ending. 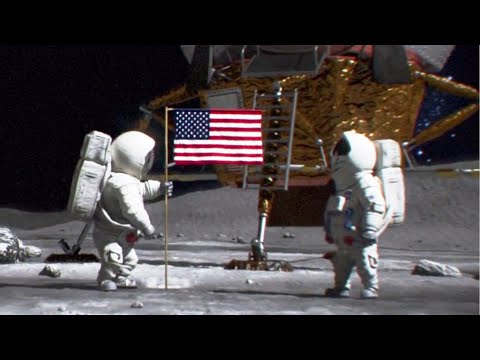