admin
This is a story about relationships and how they can shape our life forever.
It’s also about a weird character and his cat who claims his way to the eternity. Maybe it’s just a story about a man and a cat. But a good one.

A selection of Short of the Week, the web's leading curators of quality short films.

"From cooking cats to box-loving felines, the internet has a hunger for cat videos that will never be sated. On Short of the Week alone we could put together a 10+ title playlist, featuring space exploration, scary kitty’s with a thirst for human body parts and cat pianos, dedicated to our furry friends. A new title to add that list is André Almeida visually-impressive and conceptually strange animated short Catisfaction.

Born from a real-life experience, where Almeida almost had an accident after a cat ran in front of his Vespa, Catisfaction follows a tired pet owner as he slumps into his favourite chair and drifts off to a world of giant felines and flying scooters. Although originating from an IRL encounter, Almeida’s short certainly isn’t aiming for authenticity here, with its rubbery characters and strange universe, it’s a trippy experience deserving of multiple viewings.

If I’m honest, although I love the off-kilter, unexpected direction the story takes, Catisfaction’s narrative isn’t my favourite element of the short. Created without a script and starting from the image of a character with open arms riding a Vespa, the film has a freewheeling spirit that is both invigorating and a little frustrating. “I started developing moments around the characters: the Man and the Cat”, Almeida explains as we discuss the production of his short. “Those moments were created without any constraints and completely based on my imagination”. It does almost feel like animation improv at times and again the results are surprising, intriguing and a little puzzling.

With the bizarre twists and turns Almeida’s storyline takes, he needs some knockout visuals to bring his story to life and Catisfaction certainly doesn’t disappoint in this department. The opening scene of the bug-eyed cat waiting at the door for its owner, almost vibrating from purring, instantly catches the eye with its attention to detail, but it’s when we enter that dream world that the aesthetic kicks it up another gear. The character design on both the Man and the Cat is just wonderful. The stretchy, almost translucent skin of the “human” character is unsettling and mesmerising, his dangling limbs and realistic movements (as he hangs from the monkey bars in a playground) creating quite the contrast to the childish, simplicity of his face. If that wasn’t enough to impress, cue the giant cat!

Making his entrance on a scooter, before eerily staring at the Man with its pupil-less eyes, I didn’t know it was possible to both love and fear a character until I met Almeida’s Cat. The sight of it galloping through a flower-filled meadow with angel wings strapped to its back is an intoxicating experience, while the grin it gives from a rain-soaked alley is enough to induce instant nightmares. With both the characters here their story arcs aren’t clearly defined, but their company is undeniably enjoyable and when Catisfaction ends you’re left eager to spend more time with this strange man and his cat.

Having its world premiere on Short of the Week and made using a combination of Cinema 4D, Arnold Render, Marvelous Designer, After Effects and ZBrush, Catisfaction is Almeida’s first short film and what an eye-catching, unforgettable debut it is. Explaining that he wanted to both display “the endless possibilities of animation” and “inspire someone with my work” when creating his film, if this is an introduction of what we can expect from the self taught filmmaker, we can’t wait to see where his imagination takes him next. - S/W Curator Rob Munday

Reproduced on this channel with the permission of the filmmakers. 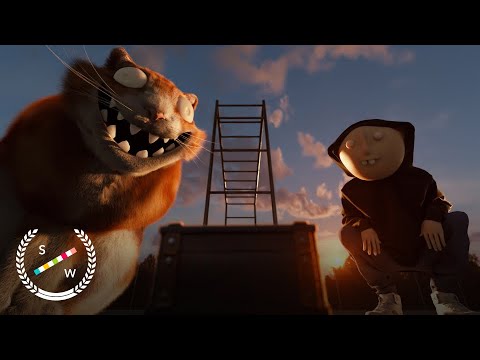 This is a story about relationships and how they can shape our life forever. It’s also about a weird character and his cat who claims his way to the e...