(When Using These Affiliate Links To Purchase, With Me Being An Amazon Affiliate Associate Means I Will Receive A Commission From Your Purchase, That Will Not Be At Any Extra Cost To You.)

Despite his family's generations-old ban on music, young Miguel dreams of becoming an accomplished musician like his idol Ernesto de la Cruz. Desperate to prove his talent, Miguel finds himself in the stunning and colorful Land of the Dead. After meeting a charming trickster named Héctor, the two new friends embark on an extraordinary journey to unlock the real story behind Miguel's family history.

Coco is a 2017 American computer-animated fantasy film produced by Pixar Animation Studios and released by Walt Disney Pictures. Based on an original idea by Lee Unkrich, it is directed by him and co-directed by Adrian Molina. The film's voice cast stars Anthony Gonzalez, Gael García Bernal, Benjamin Bratt, Alanna Ubach, Renée Victor, Ana Ofelia Murguía and Edward James Olmos. The story follows a 12-year-old boy named Miguel who is accidentally transported to the Land of the Dead, where he seeks the help of his deceased musician great-great-grandfather to return him to his family among the living and to reverse his family's ban on music.

The concept for Coco is inspired by the Mexican holiday Day of the Dead. The film was scripted by Molina and Matthew Aldrich from a story by Unkrich, Jason Katz, Aldrich, and Molina. Pixar began developing the animation in 2016; Unkrich and some of the film's crew visited Mexico for research. Composer Michael Giacchino, who had worked on prior Pixar animated features, composed the score. With a cost of $175–225 million, Coco is the first film with a nine-figure budget to feature an all-Latino principal cast.

Coco premiered on October 20, 2017, during the Morelia International Film Festival in Morelia, Mexico. It was theatrically released in Mexico the following week, the weekend before Día de Muertos, and in the United States on November 22, 2017. The film was praised for its animation, voice acting, music, visuals, emotional story, and respect for Mexican culture. It grossed over $807 million worldwide, becoming the 16th highest-grossing animated film ever at the time of its release. Coco received two awards at the 90th Academy Awards, and numerous accolades. The film was chosen by the National Board of Review as the Best Animated Film of 2017.

*Copyright Disclaimer Under Section 107 of the Copyright Act 1976, allowance is made for "fair use" for purposes such as criticism, comment, news reporting, teaching, scholarship, and research. Fair use is a use permitted by copyright statute that might otherwise be infringing. Non-profit, educational or personal use tips the balance in favor of fair use. NO COPYRIGHT INFRINGEMENT INTENDED. All rights belong to their respective owners. 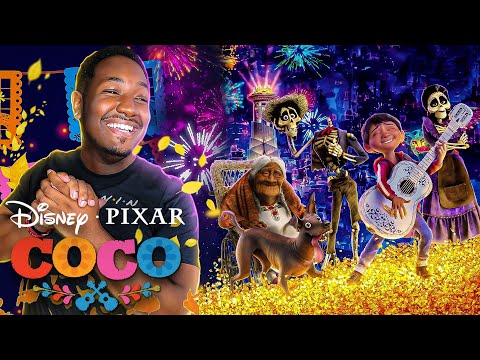