admin
As the 20th anniversary of 9/11 approached Peter Bergen sought to reevaluate the man responsible for precipitating America’s long wars with al-Qaeda and its descendants. Bergen produced the first television interview with bin Laden in 1997. He has had years to reflect on and study the man. In his new book The Rise and Fall of Osama bin Laden he captures all the dimensions of his life: family man, zealot, battlefield commander, terrorist leader, and fugitive.

Join International Spy Museum Historian and Curator Andrew Hammond in conversation with Bergen about the many contradictions he finds in bin Laden and why his legacy lives on despite his failure at achieving any of his strategic goals. Bergen, a Vice President at New America, is the author or editor of nine books, including three New York Times bestsellers and four Washington Post best nonfiction books of the year.

He is a national security analyst for CNN and has testified before congressional committees 18 times about national security issues. Thanks to exclusive interviews with family members and associates, and documents unearthed only recently, Bergen has used the knowledge he has gained in the intervening years to discover who bin Laden really was and why he continues to inspire a new generation of jihadists. 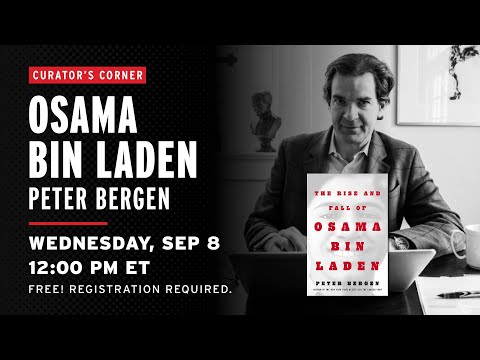 As the 20th anniversary of 9/11 approached Peter Bergen sought to reevaluate the man responsible for precipitating America’s long wars with al-Qaeda a...