admin
See our Scribal Hyperbook for Lecture Notes, Questions, Slides and Add Your Own Comments & Questions at: https://52livingideas.com/2022/02/25/dcst-session-1-8-social-justice-god-is-dead/

The 19th-century saw the rise of Electric technology, replacing Print as society's psycho-environmental ground -- while generating both socialism/communism and the robber barons. In response, the Catholic Church invented the notion of "social justice," attempting to reassert Natural Law while addressing the widely growing conflicts. Hostile states responded by isolating the Church, launching "culture wars," and ultimately fomenting revolution. Nietzsche's dramatic assertion underpinned a wide range of social movements -- both on the left and the right.

Session 2: The Encyclicals -- Disenchantment of the World

In the process, the Church's authority about the character of the human soul was severely undermined, as "experimental" psychology took over. Even that has now been discarded and replaced with Cognitive Psychology, modeling humans on computers. Increasingly marginalized, the Church seemed to withdraw, pressured by the rising social sciences, with many relying on a "mystical" interpretation of God's relationship with humanity. We forgot Aquinas's Aristotelean Faculty Psychology and manipulating the soul became a social engineering imperative.

Under Digital conditions, this failure to fully understand the unique qualities of the human soul has led to aggressive efforts to build "artificial humans." If, as modern psychology asserts, humans are simply "information processors," then why can't they be replaced by immortal machines? A return to a deep comprehension of the "psyche" is urgently needed and the Church must lead in its retrieval.

As Electric technology overtook the world in the 20th-century, it generated a society that treated humans as mere elements of the "collective." Welcome to the Borg. Mass psychology and psychological warfare based on the effects of "mass media" led to world wars and mass suffering. In an effort to find stability, an avalanche of increasingly "soulless" mass consumption and unrooted "globalist" ideology followed. But this is now coming to an end. Indeed, as a result of Digital technology, we no longer live in the "modern world."

Digital technology thrusts us all into a dramatically new cultural paradigm. Whereas Electricity emphasized "imagination". Mass society" is being replaced by one with new social forms and based on increased human autonomy -- aligning with the principles of subsidiarity.

"Peace on Earth" has long been a key imperative for the Church. Much Charity, Faith & Hope will be required as the world goes through today's fundamental change in paradigms…(to be expanded)

The post-WW II "World Order" that we have lived under has collapsed as a result of Digital technology. This presents new challenges and substantially increases risks. 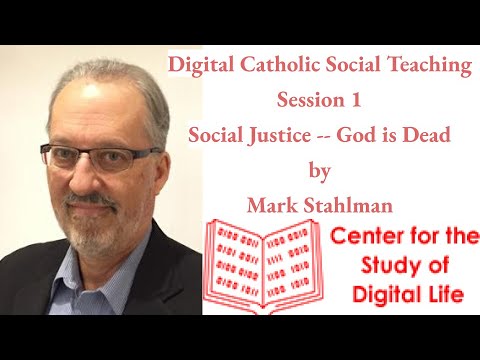 See our Scribal Hyperbook for Lecture Notes, Questions, Slides and Add Your Own Comments & Questions at: https://52livingideas.com/2022/02/25/dcst-ses...