admin
Jack and the Beanstalk from Ub Iwerks ComiColor series is one of the lesser known of the 25 cartoons in this series. It was released to theaters on November 30th 1933 making it one of the earlier of his fairy tail cartoons. I like this one for its color and kookiness', but the violence was a little too much and too often to convert the cartoon easily to be viewed by TV audiences, so it is obscure to most classic animation fans.

This version of Jack and the Beanstalk from Ub Iwerks, Walt Disney's best friend and former partner at this point, is rarely seen in its complete totally unedited form. This version is the original unedited full 8 + minute version. We have enhanced the color and sound but we have not processed it and have left in the occasional drop outs so you can see the entire work of art.

Jack and his mother are are in the common state of many fairy tail cartoons, squallier and poverty. They're starving and can't afford to eat or tend to the farm. Even the family goldfish (a strange addition to the origional fairy tale that became sort of a signature for Ub Iwerks productions - the goldfish in a bowl) is literally nothing but bones.

Jack decides (it was the 1920's and Jack was the man of the house remember) to sell the cow at the market. He is about to sell it to a butcher, but a stranger convinces this impressionable boy to buy magic beans instead. Jack's mother feels that he was cheated and punishes him for being so gullible.

She throws the beans out the window where they are watered overnight by rain. In the morning, a tall vine has grown into the clouds. Jack climbs the beanstalk and encounters a very evil and violent giant and his cruel giantess wife, who means to eat Jack. (I want to note that in this cartoon, you really feel that dread of impending death, almost as strongly as when the witch in the Wizard of Oz was going to kill Dorthey when the hour glass ran out.) Jack narrowly escapes the wrath of the couple and takes with him the giant's treasures: a magical harp and a hen that lays eggs filled with coins.

He then kills the gient, burries him and lives happy, well fead and rich with his mom, implied moral of the story, kill the bad people and take their stuff. This cartoon would never have been allowed in Walt Disney's studio, so we can look at this 3 year period of Ub Iwerks art direction, as his experimental period. Who's philosophy is best Ub Iwerks or Walt Disney, we hare not here to make morality statements, however, from a business standpoint it is obvious that Walt won this round!

We have made a unique version here for 3 reasons, the color is very much enhanced back to how it would have looked in the theater. Why do we always point out "how it would have looked in the theater" Well here is the reason, most "restorations" that were done in the 1960's and early 1970's were aimed at NTST TV broadcast. The shows were interlaced, therefore the pictures blur when you use those masters because of the very technical way Interlaces (or pictures split into 50%/50% showing in a Venetian blind looking way to combine into the picture tubes of the day). Another problem with early classic animation restorations was color was practically non-existent compared to a cartoon made today. Here is why: old TV could only display limited colors, so the process of making TV masters did not concentrate on thousands or even millions of color variants that LED projection and flat screens have shown to this generation for over 20 years, they concentrated on the 16 primary colors. We strip the yellowing effect seen in almost every other version of Ub Iwerks, and digitally enhance clarity and color back to as full and varied as possible with the masters we work from. If you have ever seen a movie or cartoon using a true ARC light projector, an major big theater ARC light projector with the high dollar lens and equipment that goes with that true ARC light, you will see that the source is White, not Yellowish, as later less expensive systems generated. Also, even though true stereo was not in wide use yet in the sound of these cartoons, they were still using a multi speaker effect that gave a fuller richer deeper sound, which we try to enhanced as well, TVs of that time did not require anything but very basic sound, so often it is tinny and thin. My vast sound studio experience gives me the skill and the tricks to truly give you closer to the theater experience of the cartoons original run!

I hope this explains what it is we do here at Cartoon Crazys, and remember we are always free to view, so enjoy our look and sound or there are many alternatives that will let you watch the yellowed flat thin sound versions elsewhere.

As always thanks for watching, we hit 100k views today now we can begin!

Thomas R Reich PhD
The Cartoon Crazys Channel
Do not forget to check out our new big budget Classic Animation History show produced by Concrete Productions and staring me! 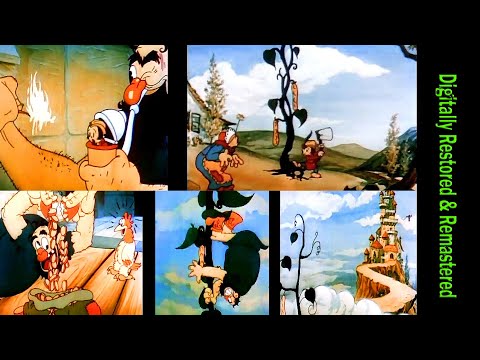 Jack and the Beanstalk from Ub Iwerks ComiColor series is one of the lesser known of the 25 cartoons in this series. It was released to theaters on No...