Diwali – A Festival of Light | An Animated Sikh Story

admin
Diwali is the festival of lights. Once a year, the entire world comes together to light divas (candles) in remembrance of good conquering bad. The night sky is also lit up with beautiful fireworks. This amazing short animation shows why people from the Sikh faith celebrate Diwali, and how it came to be known as Bandi Chhor Divas.

The story starts with the sixth Sikh Guru, Guru Hargobind Sahib Ji, who resided in Sri Amritsar Sahib. Instigated by corrupt ministers, the Guru was invited to Delhi to meet the Mughal emperor, Jahangir. Upon their arrival, the Guru spent much time with the emperor and even saved their life from a lion attack!

The emperor’s ministers had failed to make the Guru look bad, so a minister named Chandu bribed an astrologer to tell the emperor that he had been cursed! The emperor was then told that the only way to remove the curse was to imprison the Guru for forty days in Gwalior.

Although Guru Ji knew that this was all a hoax, they agreed to go to prison, knowing that they had a different task to fulfil.

Upholding the historical accuracy of this Sakhi (true story) and depicting it in a respectful way is of the utmost importance to us.

The depictions of Guru Ji are artistic interpretations which have not been animated and are still images only. None of the figures in the story have been voiced. Only the story is being narrated.

May this animation instil the true message of Diwali in our hearts and help us to implement the teachings of Sikhi into our lives.

Diwali – A Festival of Light | An Animated Sikh Story 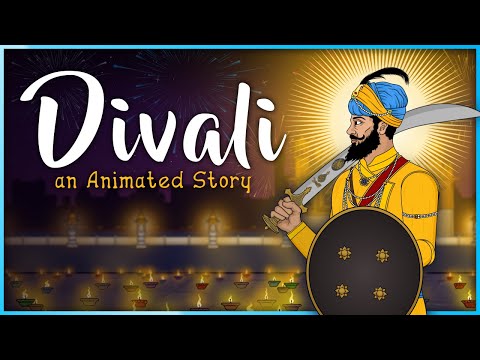 Diwali is the festival of lights. Once a year, the entire world comes together to light divas (candles) in remembrance of good conquering bad. The nig...