Two ten-year-old boys, Budhdeb and Badrinath are a bit dim witted. They are not good in academics but excel in playing tricks, fooling teachers, creating trouble but most-importantly, they manage to get out of the web of problems themselves through luck or some irrational argument. Bandbudh aur Budbak is a comedy series for young children starring two amusing specimens and featuring the rest of the students and teachers in their school.

Badrinath: Badrinath (Hindi: बदरीनाथ), also called Badri is the main character of the show and one of the two best friends. He is the smarter one who thinks ideas to fail others in the things which he wants. He is loyal in his friendship and dislikes studying and coming to school. He mostly plays the Mega Robot video game. He is voiced by Pooja Punjabi.

Budhdeb: Budhdeb (Hindi: बुधदेब), also called Buddhadev is also the main character of the show and the other best friend. He is the shy one who always depends on his friend, Badrinath. Like Badrinath, he is also loyal in his friendship and dislikes studying and coming to school. He always utters Ekdum Lallantaap (transl. Very Fantastic). Even Badrinath sometimes utters this phrase. Like Badrinath, he also mostly plays Mega Robot. He is voiced by Sonal Kaushal.

Dubey: Dubey Ji (Hindi: दूबे जी) is the class teacher of Apna School. He speaks Awadhi and sometimes speaks some English phrases too. He is fat and always punishes Badrinath and Budhdeb by making them murga (transl. Rooster) whenever they act badly in school.

Makkhan Singh Rathi: Makkhan Singh Rathi (Hindi: मक्खन सिंह राठी, known as Rathi Sir in school) is the principal of Apna School. He is from Haryana and speaks Haryanvi and sometimes uses English for official communication. He has a tall and thin frame. He loves trophies and urges students to get trophies for the school. He comes to school by a yellow-coloured car. His catchphrase is Principal Hai Hum (transl. I'm the Principal). He is voiced by Manish Bhawan.

Bindiya Roy: Bindiya Roy (Hindi: बिंदीया रोय) is the art teacher of the school. She is from West Bengal and speaks out some Bengali when she speaks Hindi or English. She wears glasses. She often says Khub Bhalo (transl. Very good).

Patel: Patel (Hindi: पटेल) is the peon of the school. He is quite lazy. He is from Gujarat and speaks Gujarati. Sometimes, he even speaks Sanskrit.

Patil: Patil (Hindi: पाटिल) is the security guard of the school. He is sincere and responsible. He is quite active. He is from Maharashtra and speaks Marathi.

Gyan Singh: Gyan (Hindi: ज्ञान सिंह) is the most intelligent student of the school and is from Punjab, India. He always gets first position in the class. He is voiced by Samriddhi Shukla

Maira & Saira: Sisters Maira and Saira (Hindi: मायरा ओर सायरा) are the pretty girls of the school. They often end up causing fights between friends and are typical complaint boxes. They are very stylish and most of the time speak English. They love to talk about movies and often talk about them when they walk in the school corridors.

Jeeva: Jeeva (Hindi: जीवा) (often incorrectly spelled as Giva even by himself) is the fattest boy in the class. He has a long nose. He considers himself very powerful but actually he is a cowardly boy. He always tries to make his classmates get punished but Badrinath and Buddhiman always saves them. The triplets are Jeeva's friends.

Sabina: Sabina (Hindi: सबीना) is the monitor of the class. She is from Gujarat. She is very responsible and wears glasses. She is Gyan's friend.

Krishnan Sir: Krishnan Sir (Hindi: कृषनन सर) is the lab assistant of Apna School. He is sincere, intelligent and responsible. He wears glasses. He is from Kerala.

Librarian: She is an anonymous female teacher. She is in charge of the library and teaches Hindi to the class, as shown in episode Angrezi Ka Aakraman. Her name is not mentioned

Cindelrella: Cindrella (Hindi: सिंडरेला) is a buffalo. She debuted in the episode "Cinderella Story". Both Badrinath and Budhdeb often bump onto her when they don't ride their cycle carefully (often shown in episodes), but she doesn't react in any way to them. 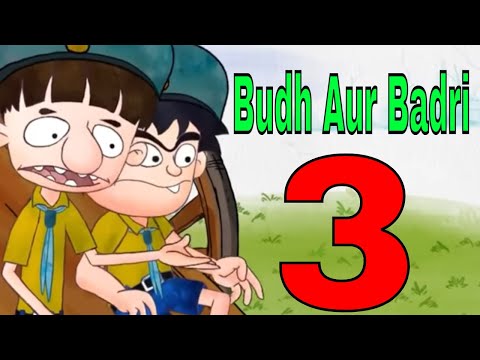