admin
Fearless (2020) Animated movie explained in Hindi Urdu voiceover. The American animation fantasy film "Fearless” story summarized with a full ending in हिन्दी explanation. The Plot is about a teenager named "Reid '' who is a video player. In his game there is a superhero "Lightspeed" who is seen fighting with the monster at the begining. "Reid '' is the manipulator of this game. Then it is seen that "Lightspeed" has three babies but they are little so they cannot use their superpower to fight with that monster yet. So "Reid" sends them into the daycare center in game . An antagonist is introduced who has no power. Knowing the powers of these kids, he wants to grab it from them. So he steals them and brings them into his spaceship. But those kids were so sharp that they moved away . And they come into an escape pod which is actually a portal to come into the real World.

At last, "Reid" notices them with his friend and he is surprised to know how they are out of game. There was a device connected with a baby through which "Lightspeed" could trace and communicate with them easily. Antagonist also starts searching for these babies. Now Reid's mission is to send the babies back into the video game. "Reid" and his friend also know about interplanetary communicator connected with one of the babies. Now they try to contact "Lightspeed" through this. Antagonist was also searching them to grab those babies again. And he succeeds and gains the power over them and starts dominating the whole city with his robotic armed force.

But It is known that babies have also known to use their powers so they are also able to get back their power. "Lightspeed '' comes on Earth and carries his babies with him into the video game as Reid '' and his friend damage the whole connections of the antagonist. At last, the antagonist is defeated who had transformed into a monster. Later, "Reid '' and his friend are shown trying to reach their next level of video game, and the film ended there. 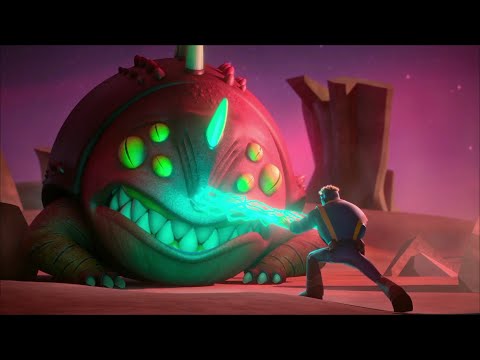