admin
Firebreather (2010) animated movie explained in Hindi Urdu. The American Fantasy animation film “Fire Breather” story summarized with a complete ending in हिन्दी explanation. The plot is about a young man named 'Duncan,' who appears to be your typical adolescent, with an overprotective mother and difficulty trying to fit in at school. Once Duncan is challenged by a trouble maker class fellow, he unintentionally demonstrates his mysteries: he can breathe fire. Duncan, a half-man/half-dragon, is fated to play a pivotal role in the looming war between humans and the Kaiju monsters. Duncan's dragon father wants him to join the Kaiju, but he can't deny his human side. All it begins when The battle between "Kaiju monsters" and human beings was being held before. Then a human woman and a king "Kaiju" breed affections for each other. Later, they have a son named "Duncan" who is half human and half dragon. Now "Duncan" wants to lead a life of human beings when he starts to go to school. His mother is seen over possessive in matter of his son and his father also protects him where he finds him in danger and his father wants to see him at the place of king as "Kaiju".

Anyhow, "Duncan" has fallen in love with his schoolmate "Jenna"and he also helps her , giving her a ruby covertly when her money is stolen by the mischievous boys of school. On the other side, it is shown that two kaiju monsters are planning to destroy "Duncan" because they don't want to accept him as their leader. In the end, the war again starts where Duncan's father also appears to protect his son and other people . At last, those kaiju monsters are taken away with this help and the people are saved from this threat. At last, Duncan's mother asks her son to come back home and he uses his wings to fly to cross the distance. The movie ends here. I hope you enjoyed this Firebreather animated video, if yes so hit likes. Thank you so much for watching god bless you all. lots of ❤️ 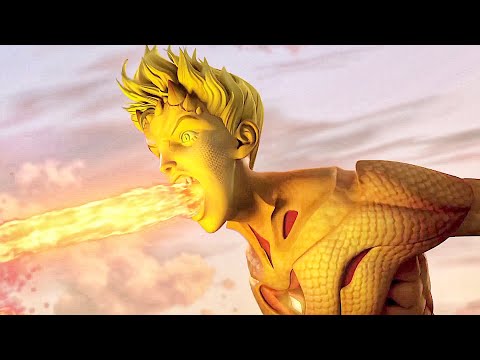