HEY EVERYBODY!! It's spring cleaning day in Fairy Forest! The pine trees in had dropped their prickly needles all over the ground during the winter, and now we needed to pick them all up so the animals don't get hurt. I told fairy mom that it was time to clean and we got right to work! While we were cleaning up the forest we found AN EGG under a tree! The wind must have blown it out of Bumpy's nest! All these chores were making me and mom tired.. so we decided to take a break to stretch our wings on the trampoline. All of the sudden the PiRATES started throwing root beer bombs at us and chasing us away! We ran away and hid by the volcano on Pirate Island, but then Pirate Niko hit the LAVA BUTTON! The floor started filling up with Lava so we ran inside the dock to stay safe. We had to wait for all the lava to cool so we could go back outside. So we decided to watch out NEW FAMiLY CAROON!! This one is call "THE FLOOR iS LAVA" and I hope you LOVE it!

It's another beautiful and peaceful day in fairy forest, the Pirates haven't bothered us in a long time. Our pixie flowers have been growing really big all year and it's about time for them to hatch! Me and Fairy Mom had to build a nest for our pixie eggs to lay in once we pick them. So we flew around fairy forest collecting all of the grass, twigs, and flowers we could find to build them the BEST little pixie house! Then we picked our eggs off of the pixie bush and put them in their nest, while we went out to collect more flowers! Little did we know, while we were building our pixie nests... the pirates were planning to steal our new babies. When we came back from getting our flowers, our pixies were GONE!! We flew over to the pirates ship to find our eggs, but on our way there we were trapped! Pirate Niko and Pirate Dad were hiding in a treasure chest and jumped out to capture us! They put me and fairy mom in pirate jail! Then Pirate Niko pushed the LAVA BUTTON to cover fairy island in lava so that we couldn't escape! Luckily we found the keys to get out of jail but we didn't know how to get rid of the lava! Then we saw 2 water guns! We sprayed the lava with tons of water to get rid of it all, then we were off to find our pixies! When we found them they were ABOUT to HATCH! On our way back to fairy forest the pirates tried to take them from us again, but then they decided that we should work together to help the pixies hatch safely! They were SOOO cute after they hatched, and they have already started to fly!

Watch The Floor is LAVA, again on the Spacestation Animation YouTube Channel:
https://youtu.be/BTd4f2k2F8Y 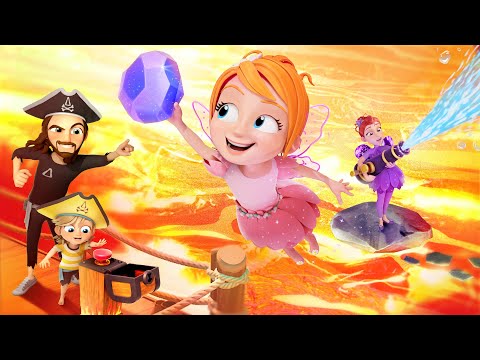 FAiRY FOREST is COVERED in LAVA!! LET'S BE FRIENDS -- https://goo.gl/a7ctjJ HEY EVERYBODY!! It's spring cleaning day in Fairy Forest! The pine trees i...