George of the Jungle | 2 Hour Compilation Of Your Favourite Episodes! | Cartoons For Kids

admin
Enjoy this two hour compilation of your favourite George Of The Jungle Episodes!

It's Migration Season and George isn't above taking any shortcut to get out of his painful migration-managing duties. / When Ursula becomes linked to the volcano, her slightest temper tantrums turn into mega-eruptions!

George has always wondered if he ever truly makes a difference... Well, what better way to find out than to be accidentally hurled into the future! / George is a sentimental kind of king.

Ape has always followed the rules – but when he and George get thrown into jungle jail for a trivial violation, Ape discovers that some rules were meant to be broken. / When Cuspid gets a magical tree branch punched through his head, it gives him incredible mystical powers.

Negotiations between the Jungle and Desert Kingdoms have always been delicate. / When George accidentally ends up in the Jungle King Afterlife (read: dies), he meets the jungle kings of yesteryear.

When Ape and George get lost on the River of Time, they run into their younger selves. / As King of the Jungle, George is an important role model to all the jungle animals.

George of the Jungle | 2 Hour Compilation Of Your Favourite Episodes! | Cartoons For Kids 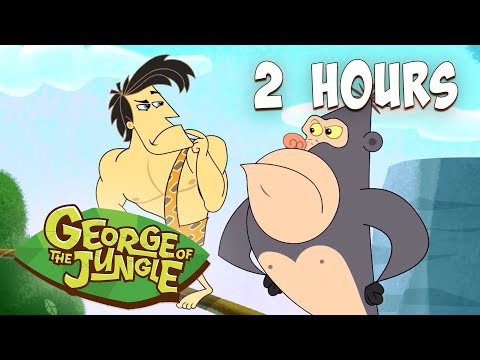 Enjoy this two hour compilation of your favourite George Of The Jungle Episodes! George of the Jungle | Season 2 | Episode 13 | Shadow of A Dolt/lovec...