George of the Jungle | Best Of Ape | Compilation | Cartoons For Kids

Ape has always played second fiddle to George – the jungle king always gets the spotlight and the applause! / Science is hard. At least Magnolia thinks it is... until she discovers Crunchbugs.

George loves and appreciates all the animals in the jungle... Except for Slippy, the tape-worm living inside his stomach. / George tests Ape's patience one time too many and George's mentor turns to some extreme methods to whip him into shape.

Ape has a secret. Actually it's more of a talking porcelain appliance. That's right, he has a hidden toilet and it's his sanctuary from the 'uncivilized' jungle. / When Cuspid finds out that George is starting his own jungle club for young animals, he sneaks out of Chicago's lair to join.

George of the Jungle | Season 2 | Episode 22 | George Who Would Be King, The/the Peel of Fate

After George saves a tribe of jerko-lemmings from certain doom, he finds himself worshipped as a jungle deity. / Ever since he was a kid, Ape has dreamed of joining the Ape Council.

George of the Jungle | Best Of Ape | Compilation | Cartoons For Kids 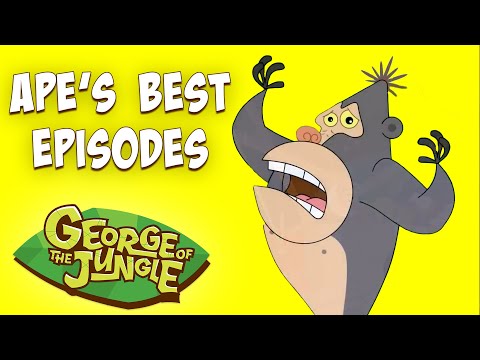