admin
We can't get enough of Magnolia and so can't you, enjoy a second edition of our best Magnolia moments!

George and Magnolia go bananas for bananas. They are crazy for the yellow and it's not like they're going to run out, right? They run out.

Tired of being the bottom of the food chain, Magnolia has herself classified an endangered species. She's thrilled with life in the first-class section of the jungle, until George and Ape decide to teach her a lesson and have her placed in her own personal zoo...

Magnolia sees Ursula as her ticket to academic fame and eagerly sells the feral jungle girl down the river. But when Magnolia sees what losing her freedom would mean to Ursula, she unleashes her own inner jungle girl…

Magnolia has never felt like she 'fit in' in the jungle – a feeling only made worse when she's abandoned by her friends in the wild. Does nobody like her!? But what seems like an epic ordeal of survival just turns out to be a really, really badly planned party thrown for her by her friends.

Science is hard. At least Magnolia thinks it is... until she discovers Crunchbugs. Not only are they delicious, but they make her brain work a thousand times better! Soon she's fulfilling all her science dreams by winning a Nobel prize and becoming the most famous scientist ever! Actually, she nearly wipes out an entire species and transforms into a bug. 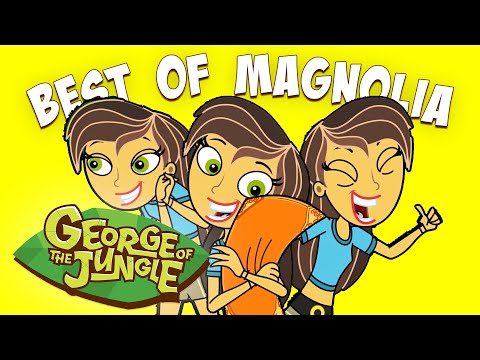 We can't get enough of Magnolia and so can't you, enjoy a second edition of our best Magnolia moments! George of the Jungle | Season 2 | Episode 7 | B...