If You Grew Up In The 80s, You TOTALLY Get These EPIC TV Theme Songs | Professor of Rock

admin
The story of the biggest tv soundtrack of the 1980s: Miami Vice from the Theme by Jan Hammer to the two Glenn Frey tracks You Belong to the City and Smuggler’s Blues… cowritten by frequent Eagles collaborator Jack Tempchin who tells the story of writing them. Get ready for a showstopper we’re going back to 1985.

We Have New MERCH! https://bit.ly/ProfessorsMerch

Check Out My Hand Picked Selection Below

Purchase The Albums
Help out the Channel by purchasing your albums through our links! As an Amazon Associate I earn from qualifying purchases at no extra cost to you, thank you for your support.

Hey music junkies and vinyl junkies Professor of Rock always here to celebrate the greatest artists and the greatest 80s songs of all time for the music community and vinyl community.
If you’ve ever owned records, cassettes and CD’s at different times in you life or still do this is your place Subscribe below right now to be a part of our daily celebration of the rock era with exclusive stories from straight from the artists and click on our patreon link in the description to see our brand new show there.

Growing up in the 80s was the greatest. I’m sure those who grew up in the 70s or the 60s could make an argument but The 80s rocked because it was that last moment in our culture before technology completely took over. It was the perfect balance of wonder and advancing technology. We were seeing new advancements in technology that were really cutting edge but we still had our imagination that wasn’t completely mobilized by gadgets. We didn’t have instant gratification. Which made us more reliant upon our wonder and our creativity. Video Games were fun, but we were more about experiencing it in real time by Playing.

What I mean is when we loved a tv show like Knight Rider, instead of playing a video game about it, we’d go out and jump on our Knight Rider Big wheel and play with our friends and make up our own play, our own episodes using our imaginations. I remember playing Duke of Hazard with my cousin Mark, and Hated it because he always got to be Bo because he had blonde hair. I had to be Luke.. We had a lot of cool companions to our favorite movies and tv shows that made them come alive and leap of the screens whereas today it seems like video games and or technology are the primary ways that we go beyond the films or tv shows.

We had comic books, paperback tie ins, toys including action figures and playsets, we even had coloring books and activity books, Bikes, T shirts, cartoons based on it, and my favorite, soundtracks. One of the best soundtracks ever for a tv show that we all loved was Miami Vice. Who didn’t cop the Crocket and TuBBs look. Here I am trying doing my best Sonny Crockett as nerd impression. Oh boy. I remember dressing up like Sonny Crockett and playing Miami Vice with my friends in the neighborhood and playing this soundtrack in my walkman.

The Miaim Vice soundtrack was a perfect TV companion. It was the perfect music meets tv extravaganza. It even had iconic musicians acting in episodes including Ted Nugent, Gene Simmons, Little Richard, Frank Zappa, Phil Collins, Miles Davis, Sheena Easton was Crockets lady for heaven sake. and of course Glenn Frey. The former eagle had two hit songs from the soundtrack which we’ll get into but let’s talk about the soundtrack album first, It hit #1 on the billboard charts, it sold over 4 million copies and was the biggest selling TV soundtrack of the 80s. Starting With the number one instrumental hit from. Jan Hammer that was part of the legendary opening of each episodes of Miami Vice. Every 80s kids got completely Pumped every time we tuned in. Am I Right?

If You Grew Up In The 80s, You TOTALLY Get These EPIC TV Theme Songs | Professor of Rock 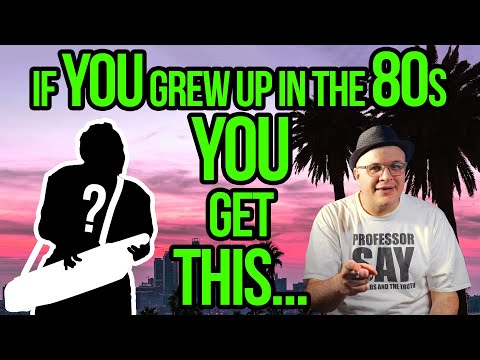 The story of the biggest tv soundtrack of the 1980s: Miami Vice from the Theme by Jan Hammer to the two Glenn Frey tracks You Belong to the City and S...