admin
This animation was made purely for entertainment, please do not take this too seriously, we are here to have fun!

Music and the characters used in this video are not owned by me.

When I descended down on earth a second time it was near the end of the Age of Myths. It was to observe humanity this time.

I met with the local god of the ocean near Greece, their name was Poseidon and by then I was already an advisor of the sea god helping to maintain its political power over other cities. Of course the local gods from back then did not know of me or the existence of higher ranking deities. So when Omega came to attack, they were powerless. Almost every local god was either killed in battle or absorbed for sustenance for Omega.

The goddess of the moon, in her effort to save the people of Atlantis sank the City and battled with Omega alongside Poseidon but they were both defeated with little effort from Omega. The underwater city was erased from existence and if my memory serves, there was a survivor.

I need to look for them.

The leader of the council, I don't know much about her other than the fact that she is the most powerful Primordial. Cheerful yet menacing she is always looking for ways to keep the other Primordials in check. She is devoted to her task given to her by the Elder Gods.

Her power does indeed rival the other Elders, She is Chaos, she cannot be confined nor controlled, she is the most free yet at the same time the most shackled.

Her Calamity Trait : Chaotic Order is an evolved version of the usual calamity trait. To be able to summon a planet sized dimension and within it she has the power to mess with other powers, to confuse the senses as well as empowering or weakening destruction dealt by her or other people. The potency of this trait comes with the fact that she can shut down other trait within this dimension. Irys and I are the only ones able to ignore the Trait negate but I'm not sure why. Our trait may not be negated but it doesn't mean it's at it's full power either, they are still weakend by it. That's how powerful an evolved trait can be.

She only ever spars with Kronii and Sana. From my understanding her power is complicated and has many applications. The power of probability, luck, and to ignore the rules of reality she the embodiment of everything not normal. She cannot be slowed down by anything, Stopping time against her doesn't work, Chucking her into a black hole will only make her mad. Her speed strength and power continually vary and it is impossible to measure what she can truly do. A question mark is the best way to describe her.

A good friend who understands me, Irys is a responsible person who should've been part of the council. She cares about everyone and is not afraid to voice her opinions.The being who represents Hope, she is also one of the more powerful Primordials who can go toe to toe with anyone including Baelz.

Her trait is a unique one, The Victory Trait. This defensive trait let's her gain the power to achieve 'victory' over certain things be it against the council or even the elder gods. It may not be a strong trait and She doesn't necessarily win against those who are stronger than her, She can still die if her conditions are different. The conditions she set for her victory trait is "To live" as long as she lives by this quote Her trait will never let her die. To her living is winning. This trait is only strong because of her Authority of Hope. But if she succumbs to her evil side she will be able to set her conditions from "To Live" to "To kill" she cannot change her conditions as long as she is part of the good side.

Her Authority over Hope let's her also gain power depending on how dire her situation is. She fought against Omega and despite the overwhelming difference, she survived. It is stated by her that if she regenerated her full divinity she could have damaged Omega.

With her full power she can overwrite reality and causality of the world with the use of her crystals and the light they emit. She rarely makes use of this ability as it depletes her entire divinity and if a god's divinity runs out in the mortal realm they are forced to come back. 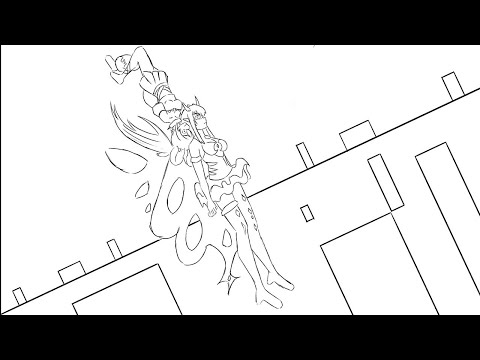 This animation was made purely for entertainment, please do not take this too seriously, we are here to have fun! Music and the characters used in thi...