Take one part spiky hair, two parts genius sisters, a dash of talking dog, mix thoroughly and the result is an action-packed animated series about a boy willing to try anything in the name of science. Join Johnny and his dog Dukey in their high-action escapades.

• Jonathan "Johnny" A troublesome, unpredictable, and widely iconic 11-year-old boy who is the brother of Susan and Mary and the son of Hugh and Lila and he serves as the main protagonist and hero in the show. He is frequently called the "kid with the flaming hair" due to having scarlet red highlights in his yellow hair. As well as this, he is most often seen wearing green cargo pants and a black shirt with a trefoil symbol on it, which he wears under a navy blue dress shirt, and a watch that he rarely uses. Because he has Susan and Mary by his side, he can live any kid's dream, only to find that some dreams aren't worth living. He is very hyperactive, and often messes with his sisters' inventions, causing trouble and mayhem, but just as often proves himself to be extremely clever such as by frequently tricking his genius sisters or conquering the day from whatever goodness happens to show up. Johnny is also quite spoiled and stubborn, as he gets what he wants, through deceit, blackmail, orpersuasion. Johnny has an alter ego that he calls "Johnny X", who is a superhero that has various superpowers, including hurricane hands shapeshifting, fire-powered transformation, teleportation, ESP, "Power Poots", and flight. A running gag for this form is that his hurricane hands never work, either due to the target being immune to it or other factors. He was in love with Janet and later Sissy, the latter born out of hostile rivalry.

• Dukey Johnny's anthropomorphic 16-year-old talking pet dog and best friend. The cause of Dukey's anthropomorphism is because of one of Susan and Mary's inventions, thus giving him humanlike abilities. Dukey, when Mrs and Mr Test aren't around, will stand on his hind legs rather than all fours, like he does when Johnny's parents are around. The reason for this is that Mr. Test banned Susan and Mary from DNA experiments, which was how they gave Dukey human-like intelligence. There have been a few "close calls" around the series, such as when Mr. Test got trapped inside of one of Johnny's video games and Johnny and Dukey also went inside the game to rescue him, and Dukey accidentally spoke in front of him, causing Mr. Test to ask, "Did Dukey just talk?" Every time one of his parents asks this question after Dukey just spoke in front of them, either Johnny, Susan, or Mary answers "no" and their parents immediately believe them. Sometimes Dukey dresses as a human being when going out in public, and he is addressed by others as Johnny's "hairy friend" or "the kid with the rare hair disorder" because the minor characters' lack of intellect causes them to believe that Dukey is a human. 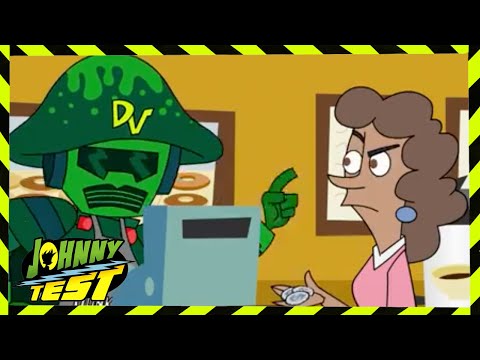