admin
Mosley (2019) Animated movie explained in Hindi Urdu. The American Fantasy animation film “Mosley” story summarized with a full ending in हिन्दी explanation. The plt is revlve around Thoriphant animal 'Mosley' which means he is a cross between elephants and horses. It was sold by Bemus, a human who used to bid on or sell the animals. But the cruel owner Simon requires a lot of work, but Mosley also has a family, a wife, and a son. Mosley was tired of human behavior and wanted to get rid of it, so it moved in a search of uprights that worked with their hands and walked like humans. It discovers a cave, followed by three Uprights named Warnie, Deaver, and Gailin. They bring it to their city and have it meet with their queen. The queen tells them that if they eat the pure fruit, they will become upright. Mosley visits the upright city and is astounded to see Thorohants at work. Later, Mosley fights the hunter Warfield sent by Bemus and, with the help of the fireflies, finds the fruit of our tree after many hardships. It returns to its family, and it now has an adolescent daughter named Rosie. It asks Simin to leave its family, and then it shifts to the Upright city, and that was the movie's happy ending. Please Like, share and subscribe. 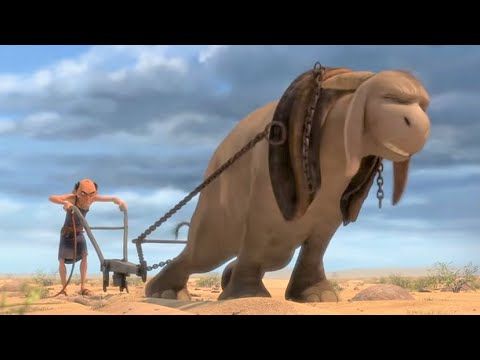