admin
Bar chart data visualization of the most popular cartoons based on broadcasting viewer numbers 1919 - 2022.

SpongeBob SquarePants chronicles the adventures of the title character and his aquatic friends in the fictional underwater city of Bikini Bottom, first aired in May 1, 1999.

Dragon Ball Z (2009) is a Japanese anime tv series, it’s the sequel to the 1986 Dragon Ball. The series continues the adventures of Son Goku in his adult life.

South Park, created by Trey Parker and Matt Stone, became infamous for its profanity and dark, surreal humor that satirizes a wide range of topics toward an adult audience.

The Simpsons is an American animated sitcom created by Matt Groening. The Simpsons received acclaim throughout its early seasons in the 1990s, which are generally considered its "golden age”.

Scooby-Doo is an American animated media franchise comprising many animated television series produced from 1969 to the present.

The Flintstones was originally broadcast on ABC from September 30, 1960, to April 1, 1966, and was the first animated series to hold a prime-time slot on television.

Tom and Jerry is an American animated media franchise and series of comedy short films created in 1940 by William Hanna and Joseph Barbera.

Popeye the Sailor Man is a fictional cartoon character created by Elzie Crisler Segar, in 1929. Popeye attributed his strength to spinach. The popularity of Popeye helped actually boost spinach sales.

Steamboat Willie is considered the official debut of Mickey Mouse and Minnie Mouse. It was also the first Disney cartoon with synchronized sound.

Alice’s Wonderland, not to be confused with Alice in Wonderland, was the first animated short film produced by Walt Disney. It was was released in 1923.

Little Nemo is one of the oldest cartoons in the world, it premiered in 1911. It is a detailed hand-drawn animation, which looks similar to modern cartoons.


Would appreciate if you wanna support my work
https://www.buymeacoffee.com/dataslothbR 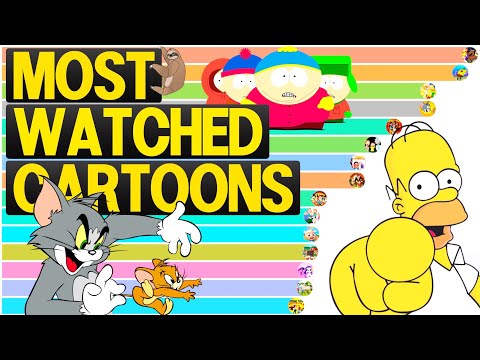 Bar chart data visualization of the most popular cartoons based on broadcasting viewer numbers 1919 - 2022. SpongeBob SquarePants chronicles the adven...