admin
Mune: Guardian of the Moon (2014) Animated movie explained in Hindi Urdu. The American Family Fantasy animation film “Mune Guardian of Moon” story summarized with a full ending in हिन्दी explanation. The Plot is about a small boy named Mune. The time is displayed when there was no moon or sun. The sun and moon are brought to the planet by the two guardians. It was now time to replace the moon and sun's, guardians. There was a formal ceremony. Mune arrives at the ceremony, insisting on his father. On the other side, a wax girl is shown, who also enjoys gazing at the sky. She was made of wax, and she wants to attend the ceremony to select the moon's guardian because The old guardian has chosen Sohone to be the sun's guardian. Mune attends the ceremony and is chosen as the Moon Guardian. Mune is told everything by the old moon guardian, who then vanishes.

Mune was unable to control the moon, and the moon-controlling rope snapped. The moon's expected guardian became enraged, wondering how a small boy could manage all of this. Sohne and the expected moon guardian both have negative things to say about Mune. A fire demon who wanted to steal the sun is also shown, and it does the same because it used to be its guardian. It steals the sun and blows it away, causing the planet to become dark and nothing could be seen. Sohone arrives at Mune's temple, followed by the fire demon, and Sohone hands over the moon to the new guardian, the moon gradually shrinking in his hand.

Mune later returns home, but his family refuses to accept him, and he joins Sohone and the wax girl in their mission to reclaim the sun from the fire demon. Mune also desired the return of the moon. On their way, Mune tells them and shows them a door and says, "I will bring the moon back from here," and the wax girl joins him in this endeavor, and the moon is returned. Remember that the moon gets its light from the sun, so they must bring the sun back from the fire demon. When the girl notices where the sun is, she blows it out, and it is re-illuminated, and there is light everywhere, but she melts in its light.

Now that the moon was shining brightly, the old Moon Guardian also assimilated Later, Sohone and Mune placed the moon and sun at their respective locations. Mune misses the wax girl, so he recreates her with the wax and hands her a small piece of moon in her hand. The girl was revived once more as the sun was set at its place from the dim rays of the sun. Mune was content, and this was a satisfying conclusion to the film. This film is well worth seeing. It was extremely enjoyable for me. I recommend that you all watch this for entertainment purposes. Hope you like the explanation. 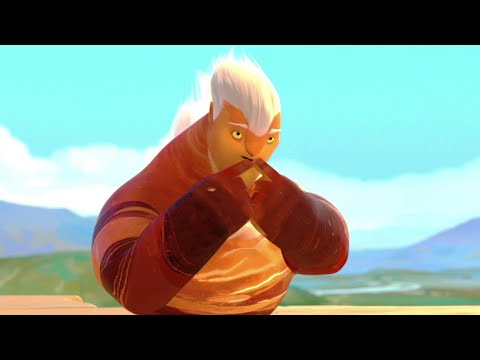