Kathu the superhit Malayalam animation movie is the story of a girl child, a cute kitten named Kathu. Appu the squirrel and three grasshoppers are her best friends. Their pranks and plays make the songs and stories of this animation movie. The core theme of Kathu is the essential life values for children. in 2011 the state film academy Govt: of Kerala selected Kathu as the best children's program of the year.

★ Friendship
Appu was waiting on top of a tree branch outside Kathu's home. The cat family is in a siesta under the evening sun. Wow, it's playtime. Appu got a recent fascination with cricket. This time his "googly" landed on top of Kandan. As usual, Kandan began the chase game. But the most unnatural event of their little life unfolded. An eagle from nowhere took the kids and flew away. Kandan tried his best to prevent the bird but in vain.

The bird landed on top of a steep hill, where her nest and hungry birdies were located. She dropped the kitten and squirrel inside the nest and flew away. The birdies were small and cute Kathu befriended them quickly. All of them started to play. But Kathu lost her grip and fell down to the jungle. Appu followed her. It's all about friendship.

★ Planing
Kathu opened her eyes in the middle of a thick and dark forest. The first thing she noticed was two curious eyes and ears. It was a bunny curiously examining. He told them the place is "Kurinjikkadu" which means the forest of Kurinji flower. He invited them to the top of the hill to get a better view of the forest. That was an amazing spectacle. Kathu and Appu were enchanted by the beauty of the forest. But The bunny felt something fishy around. He reminded them the place is beautiful and dangerous too. Within a minute that danger unfolded. What happened next? Watch this story.

★ Leadership
With careful planning Appu and Kathu were managed to cut a jackfruit and it landed on Chemban's head. The wolf fainted. Kathu and Appu went down to the rabbit hole. They callde mittu. But nobody was there. What happened to the baunny? Watch this story.

★ Broadmindedness
Appu and Kathu tricked Chemban and went into the rabbit hole. The rabbit hole reached the crowded restaurant of the forest. Kathu had an encounter with the local goons and she chased them away. But two curious eyes were watching the whole scene from a distance. What happened next? watch this story.

★ Hope
A wild cat suddenly appeared and took the custody of Kathu. Suddenly thunder flashed and Kathu managed to save herself and it started raining in the forest. When the rain was settled Kathu and Appu found the wild cat under a fallen tree, seriously injured. Kathu with the help of Appu pulled the tree trunk away and saved the wild cat. He promised his help to the friends to return to their home. Suddenly the heard the roar of a tiger. What happened next? Watch this episode. 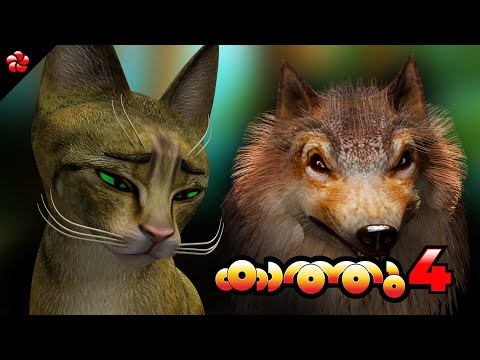