"Twitter added a warning label Monday to a tweet from a Republican lawmaker that depicted an animated killing of Rep. Alexandria Ocasio-Cortez, D-N.Y., and an attack on President Joe Biden — saying the post violated the company's rules about "hateful conduct."

But the tweet, from Rep. Paul Gosar, R-Ariz., will remain accessible for the "public interest," Twitter said in its notice."

Help support our mission and get perks. Membership protects TYT's independence from corporate ownership and allows us to provide free live shows that speak truth to power for people around the world. See Perks: ▶ https://www.youtube.com/TheYoungTurks/join 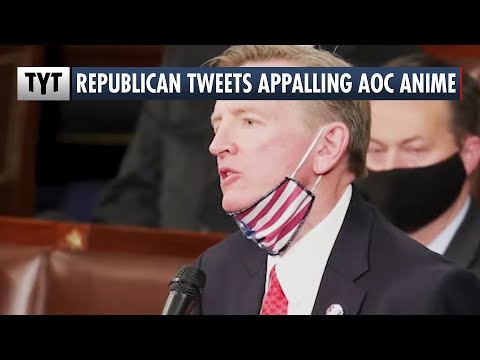 Arizona Representative Paul Gosar was recently issued a ‘hateful content’ warning on Twitter after he posted an edited video clip from the anime Attac...