admin
Shark Tale (2004) Animated movie explained in Hindi Urdu. The American Fantasy animation film “Shark Tale” story summarized with a complete ending in हिन्दी explanation. The plot revolves around a fish city where the small fishes are afraid of the sharks because the sharks eat them and the news anchor fish tells everyone that the huge fishes are gone. The small fishes become happy and go about their daily lives. A male fish named Oscar is shown; he works in a Whale wash, but he stole some money from the owner and now has to return it. To return the money, its partner Angie, a female fish, gives it a pearl, which it sells and invests in a horse in the horse race court, but it loses that money as well, which was 1 lac Glans. A vegetarian fish Lenny is also shown that was a shark its father was displeased with it because it did not eat fishes and Lenny meets Oscar. Lenny requests that Oscar keep it with him because it does not want to go to its father. Oscar became famous for ending shark, Lenny's brother, who was killed by an anchor, but everyone believes Oscar has ended it.

Later, Don Lino, Lenny's father, sends sharks to bring Lenny and the Shark Slayer, which means Oscar, but Lenny dies before they arrive. Oscar eventually meets Don Lino and realizes that it is your son and that half of it is vegetarian. Love your sin because love knows no bounds. With it, Don Lino understands and embraces its son, and it also warns Oscar that if he eats small fishes, they will be able to live peacefully. In the final scene, Oscar proposes to Angie, followed by a cute song playing on which everyone dances and this was the film's happy ending. 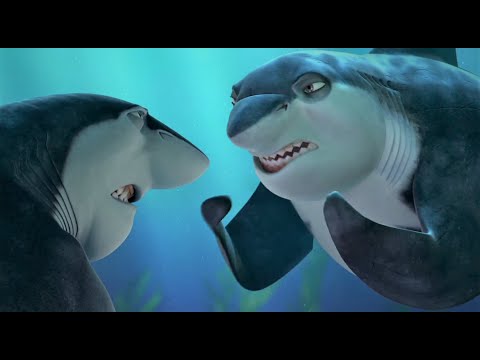