admin
Spider Man Into Spider Verse (2018) Animated movie explained in Hindi Urdu. The American Fantasy animation film “Spider Man Into the Spider Verse” full story summarized with a complete ending in हिन्दी explanation. This plot is about a young boy named Miles. He admires Spiderman and aspires to be him. Every Spiderman story has a Spiderman, but this one is unique. Kingpin, Spider-adversary, Man's has created a supercollider, which is a machine that can transport or shift people to other dimensions. Kingpin kills the superman of the dimension where he lives, which is Peter Parker, while the collider activates and the Spiderman of another dimension, Peter B Parker, arrives. That was a risky collider. It has the potential to destroy the entire world. Miles must turn off the collider. He visits Spider Man's home and meets his aunt. He discovers a Spiderman costume. Kingpin kills Peter Parker, but before he dies, Peter discovers Miles has similar abilities to him. Then he tells Miles that he has to shut down the collider. There were Spider Man from other worlds. Finally, because the collider was activated, all spider-men moved to their respective dimensions, and Miles discovered his other powers and saved them all. Miles was now this era's spider man. The movie came to an end with this.

Disclaimer: This fantasy animation content is intended solely for family audiences of all ages. It is NOT only designed for a younger audience, but mostly teens and adults enjoy it as well. Furthermore, all footage belongs to their respective owners; we simply used it after highly editing and adding our own commentary under fair use. Thanks 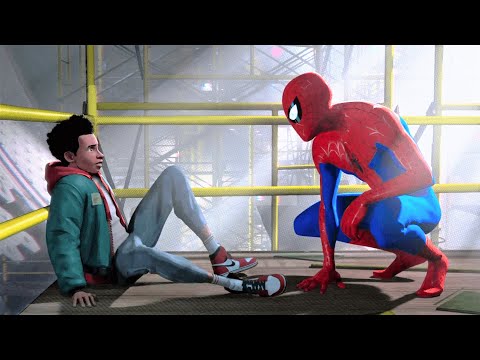