admin
Storks (2016) Animated movie explained in Hindi Urdu. The American Fantasy animation film “Storks: Baby-Delivery Birds " full story summarized with a complete ending in हिन्दी explanation. The plot revolves around the factory which business is to deliver human babies by birds. 'Junior', a stork, is shown who wishes to be the boss so that everyone will pay attention to it. However, in recent years, the Storks have stopped delivering babies because Stork 'Jasper' refused to deliver the baby due to the baby's cuteness. 'Junior' was tasked with shooting another stork. But it was a good-hearted stork, so it didn't do it and assigned Tulip the task of delivering the letter sent by the people. Junior's owner, Hunter, gave him this order, but he did not follow it. Later, a boy named 'Nate' is shown who is also lonely and wishes for a small baby brother because his parents aren't paying attention to him. He goes to the corner store to get a letter for his baby brother.

Tulip and Junior discover the bay and proceed to deliver the baby, where they discover the cutest baby. They had many difficulties delivering the baby to her address because the Hunter changed the address. Because he didn't want the storks to deliver the baby, but in the end, after many difficulties, Junior delivered the baby to Nate's home, and Tulip was also sent to its home, and its family adores it. The film concludes with this lovely scene.

Disclaimer: This Warner Animation Group based fantasy animation video is primarily meant for family viewers of all ages. It is not only aimed at children, but many teens and adults enjoy it as well. Furthermore, every footage belongs to their individual owners; we just used it under fair use after heavily editing and adding our own commentary. 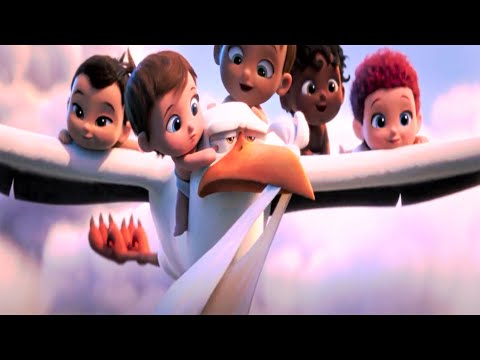