So today we are using... Itadori Yuuji from the newest update in ABA, yeah par updated ABA and im so late with this... like damn every update from par is just another hell of a blessing, anyways onto the topic... so I decided to run
3v1s/1v3s with Yuji, and uhhh, it was a hell of a job until I became good with it (learned some tactics and teches) however i can't share those because...I SUCK AT IT, and idk, anyways...

Yuji Itadori is S Tier for 3v1s, if you're good with his base, his awakening is a guranteed 5+ stocks, and not just stocks, MASSACARES, don't forget what sukuna said "This Will be a Massacare!" HE WAS RIGHT, HIS AWAKENING IS LITERALLY PAIN, HE CAN'T DIE + HIS MOVES ARE HARD TO AVOID, LIKE HIS DISMANTLE OR CLEAVE OR FIRE ARROW INSTANT OR GB AND STUFF, and his domain expansion is just guranteed 3 stocks since funny 80 dmg

Anyways yeah this char is good but if you suck with his base, get other ones, preferable based on my other johnymiko 1v3 videos, but yeah... also, no I didn't fight bots, they have a pro, legend, and an expierenced(which is lancer) and lancer is no skill but op in 3v1s anyways, but yeah you get the point, they either messed up or im just better, idk any other excuses at this point.

Now below.. are tags... now go sub or like idk do anything you want i'm normal with any critic/support!

still waiting for Sagee4, NanoProdigy,Strongest_Hashira/Sengoku,JustHomura,MgBerserk,Infernasu or other popular yters to try it 3v1s out! 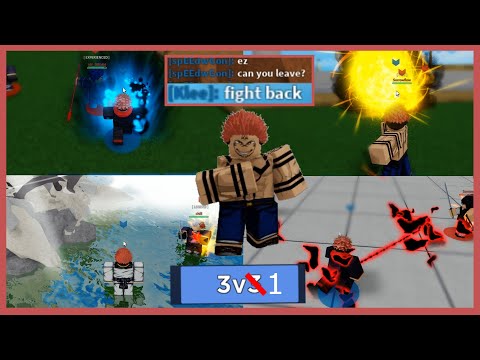 discord:https://discord.gg/jtu9pRGcha DISCLAIMER: I speak alot of things So today we are using... Itadori Yuuji from the newest update in ABA, yeah pa...