Up to this point, the Bee and Puppycat cartoon show has been rather short. You can binge the entire first series in about an hour and a half. But the series itself is rich with lore, and deep characters that really make you think. It’s a show that appears to be for children, and even though it possesses slight profanity, it’s nothing worse than you would hear in the schoolyard, and it visits concepts that the current generation, as well as their predecessors know well, such as the inability to hold down a job, not being able to chase your dreams, as well as betrayal in your love life. This show is very deep, but also playful in a way that anyone can get into it easily, even if you’re only there for the comedy, which it never skimps out on. But on the side of lore, as said before, there is a lot here. And since Lazy in Space has dropped, it’s probably best for us to catch up on all of this.

Bee and Puppycat first aired as a part of our Cartoon Hangover line-up, and has since become a smash hit. If you haven’t seen it yet, or want to catch up, be sure to check it out. We have it listed among our videos for everyone to enjoy. And be sure to stream it on Netflix. We’ll leave a link in the video, as well as in the description below. Lazy in Space is gonna be awesome. We’ve been waiting for this for three years and I’m sure you don’t wanna miss it. With the release of such a great show, it is very apparent that Frederator indeed does love you. 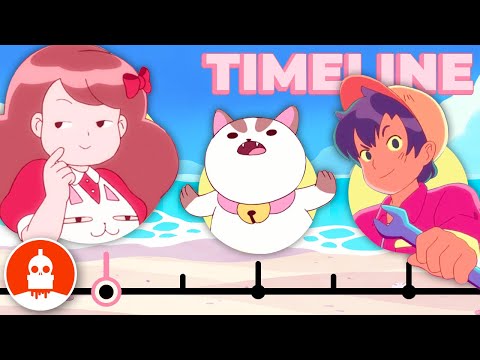 The Complete Bee And Puppycat Timeline | Cartoon Hangover Stream Bee and PuppyCat on Netflix: https://www.netflix.com/title/81245457 Up to this point,...