The Crocodile Sharpteeth Story | Full Episode | The Land Before Time

admin
Cera has a close-encounter with some Belly Draggers, and begins to lie about how she defeated the Sharpteeth.

► Watch More The Land Before Time All Videos: http://bit.ly/2vFvQGp

The Land Before Time introduces us to Littlefoot, Cera, Spike, Ducky and Petrie, and follows them on their first journey together - an exciting quest to find the lush, legendary Great Valley. Along the way, the prehistoric pals overcome many challenges and learn the value of teamwork and friendship.

During the age of the dinosaurs, a massive drought forces several herds of dinosaurs to seek an oasis known as the Great Valley. Among these, a mother in a diminished "Longneck" herd gives birth to a single baby, named Littlefoot. Years later, Littlefoot plays with Cera, a "Three-horn", until her father intervenes; whereupon Littlefoot's mother describes the different kinds of dinosaurs: "Three-horns", "Spiketails", "Swimmers", and "Flyers".

That night, as Littlefoot follows a "Hopper", he encounters Cera again, and they play together briefly until a large "Sharptooth" attacks them. Littlefoot's mother comes to their rescue, receiving fatal injuries in the process. An earthquake swallows up the Sharptooth and divides Littlefoot and Cera from their herds. Littlefoot receives advice from his dying mother. Depressed and confused, Littlefoot meets an old "Clubtail" named Rooter, who consoles him. He is then guided by his mother's voice telling him to follow the sun to the Great Valley.

The Crocodile Sharpteeth Story | Full Episode | The Land Before Time 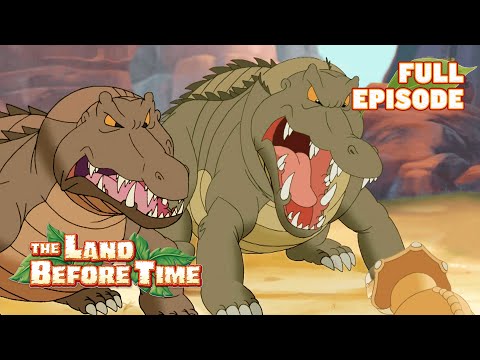 Cera has a close-encounter with some Belly Draggers, and begins to lie about how she defeated the Sharpteeth. Episode: The Amazing Three Horn Girl (Se...