The Office vs. Brooklyn Nine-Nine | Battle of the Best Christmas Episodes Ever

'Tis the season for Christmas specials. The Office and Brooklyn Nine-Nine are hands down two of the funniest shows to ever grace television and produced hilarious holiday episodes. But which one had the best?

Synopsis: The Office is a hilarious mockumentary-style glimpse into the water-cooler culture of the 9-to-5 world. Steve Carell stars in his Golden Globe®-winning role as earnest but clueless boss Michael Scott, who can't help but contribute his own irreverent commentary to the happenings at the Dunder Mifflin Paper Company. As the staff deals with potential office mergers, romances, and pranks, Michael's always there to say all the wrong things at all the right times.

From Emmy Award®-winning writer/producers Dan Goor and Michael Schur (Parks and Recreation), starring Emmy® and Golden Globe® Award winner Andy Samberg (Saturday Night Live) and Emmy Award® winner Andre Braugher (Men of a Certain Age, Homicide: Life on the Street), the Golden Globe® Award-winning Brooklyn Nine-Nine is a single-camera ensemble comedy about what happens when a talented, but carefree, detective gets a new captain with a lot to prove. Detective Jake Peralta (Samberg) is a good enough cop that he's never had to work that hard or follow the rules too closely. Perhaps because he has the best arrest record among his colleagues, he's been enabled - if not indulged - throughout his entire career. That is, until the precinct gets a new commanding officer, Captain Ray Holt (Braugher), who reminds this hotshot cop to respect the badge.

About Peacock: The streaming service from NBCUniversal that’s as free as a bird. Current hits. Timeless classics. Timely updates. Stream Now With Peacock, stream current hits, hundreds of movies, thousands of episodes of TV shows, and exclusive Originals – plus timely news, live sports, WWE, and daily pop culture. Peacock’s got all your faves, including Parks & Rec, Yellowstone, Modern Family, and every episode of The Office.

The Office vs. Brooklyn Nine-Nine | Battle of the Best Christmas Episodes Ever 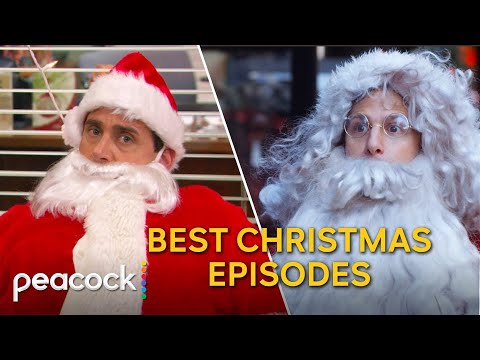