Based on
The Nativity of Jesus,
Original concepts
by Tom Sheridan


Synopsis
In "9 months B.C.", Mary is visited by an angel telling her she will bear the Messiah. A pygmy jerboa named Abby overhears and tells the other animals as a star begins glowing brightly in the night.

Six months later, a young donkey is tired of milling wheat and wishes to join a traveling royal caravan so that he may feel important. An older donkey helps him escape the miller who owns them, and the young donkey ends up with an injured ankle at the house of Joseph and Mary who have just celebrated their wedding. Mary takes the donkey in and names him Bo, and reveals to Joseph that she is pregnant, with Joseph accepting Mary's situation after praying to God. During this time, Bo and his dove friend Dave plot to escape despite Mary's kindness, but end up staying three more months.

Meanwhile, the three wise men and their camels, Felix, Cyrus, and Deborah, arrive at the home of King Herod. The wise men reveal their gifts of gold, frankincense, and myrrh, but when they reveal that it is actually for the "new King", he sends them on their way to meet him, but secretly sends his royal hunter and his two dogs, Thaddeus and Rufus, to find and kill the new King.

As Joseph and Mary leave Nazareth in order to head to Bethlehem, Bo and Dave try another escape, but are confronted by the dogs, who knew of the home by interrogating Abby. After learning that Joseph and Mary are not home, the hunter and his dogs leave to look for them. Feeling guilty, Bo decides to warn them with Dave joining him. Along the way, they meet a friendly sheep named Ruth who left her flock when she saw the star. They catch up to Joseph and Mary in time to warn them and hide them in a market place where the hunter ties up his dogs. Bo releases the cart Joseph and Mary were using to roll down and cause a chain reaction that knocks the hunter down a well. However, he creates severe damage to the market in the process, and Joseph, unaware of the danger, tells Bo off for his actions.

Upset with being rejected, Bo leaves and Dave follows until they arrive at the royal caravan. While happy to have found it, Bo realizes that he liked being with Mary and tells Dave, who admits that he is not upset and that he just wants Bo to be happy with his decision. Together, the two return and make up with Ruth, and then convince a frustrated Joseph to talk to Mary. Mary admits that it has been difficult for her and that she is scared of the importance of the baby, and they make up when Mary begins having contractions. They arrive at Bethlehem where Joseph is unable to find an inn for Mary. The miller, who just so happened to be there, kidnaps Bo with Dave and Ruth leaving to rescue him. The wise men arrive as well, but the camels, who are aware of Herod's plot, are left tied to a post.

Bo ends up in a stable where he meets a horse named Leah, a cow named Edith, and a goat named Zach. They reveal that they have not been able to sleep because the star's bright light has been shining through on their manger for 9 months. Realizing that this is where the baby is supposed to be, the animals help Bo escape and he catches up with Dave and Ruth while spotting the hunter and his dogs. Bo finds Joseph and Mary and gets them back to the stable while Dave runs into Cyrus, Felix, and Deborah and helps them escape their bonds. Ruth finds her flock, who had previously refused to follow her, and tries to convince them to help, but gets unexpected help from the angel who informs the shepherds and the sheep that the Savior is coming. Bo manages to fight off Thaddeus and Rufus, but is outdone by the hunter. Suddenly, Ruth and her flock, the camels, and Dave arrive and dispatch them by having them hang from a cliff. The hunter lets his dogs fall, but they are saved by Bo while the hunter himself falls to his death.

All of the animals, who are now joined by Abby who assumed the danger to be ongoing, and the redeemed Thaddeus & Rufus, shepherds, and three wise men arrive to see baby Jesus. Bo realizes that he has been carrying the new King the whole time. Deborah predicts that this event will be remembered around the world for years to come. After that, Joseph buys Bo from the miller, and Bo, Dave, and Ruth help him and Mary raise Jesus. 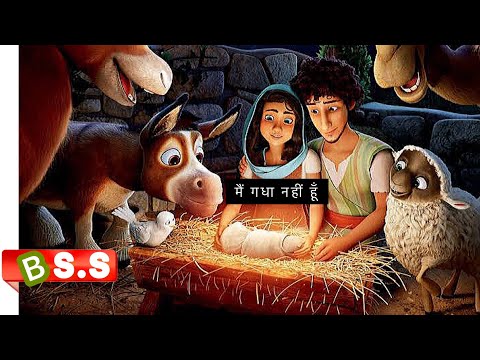