The Voice Of Naruto Was Almost A Real Life Spy?! | Episode 4

admin
Join our Patreon to get first dibs to be on the podcast + get ad-free episodes, exclusive content, and much more! https://www.patreon.com/ihearvoices Listen to to I Hear Voices wherever you listen to podcasts!

Today on I Hear Voices, Will Friedle and Christy Carlson Romano sit down with Maile Flanagan AKA Naruto Uzumaki AKA Piggley Winks AKA Principal Perry. Maile has been voicing one of the most popular anime characters for 17 years, which means she has voiced Naruto in ​​720 episodes, 46 video games, 6 movies!

Maile shares her thoughts on why the fandom around anime is exponentially growing. She also details her journey into acting and voice acting. SPOILER ALERT: she originally planned to be a spy, just like her father.

Her unique childhood and curious nature have guided her to hone in on specific skills, like listening to the voices around her. Real-life interaction has been the source of her inspiration, and boy, is she talented.

Will and Christy had so much fun with Maile as they deep dive into Law & Order SUV nerdom, Con experiences, and more. PLUS Maile voices two original characters that blew our minds!

About Christy Carlson Romano:
Welcome to the official Christy Carlson Romano YouTube channel! Christy has been a working actress and singer since she was 6 years old. She moved to Los Angeles with her mother when she was 14 to star in the Disney Channel franchise, Even Stevens as Ren Stevens alongside Shia LaBeouf. Christy enjoyed many years with Disney gaining an Emmy nomination for her voice work as Kim Possible and starring on Broadway in Beauty and the Beast. She went on to balance her college career at Barnard College, Columbia University with filming movies for ABC Family including: ‘Campus Confidential’, ‘Taking Five’, ‘The Cutting Edge 2: Going for the Gold’, and ‘The Cutting Edge 3: Chasing the Dream’. Christy returned to Broadway in her mid twenties and learned to be a puppeteer in the Tony-Award winning ‘Avenue Q’. Christy was married to her husband on New Years Eve , 2013 in Banff, Canada after having met in a screenwriting class in college. She became impassioned with directing and made her debut in Lionsgate’s “Christmas All Over Again”. While she still works as an actress, she enjoys living in Orange County with her husband, Brendan Rooney, and daughters, Isabella and Sophia. Make sure to subscribe and enable ALL notifications!

The Voice Of Naruto Was Almost A Real Life Spy?! | Episode 4 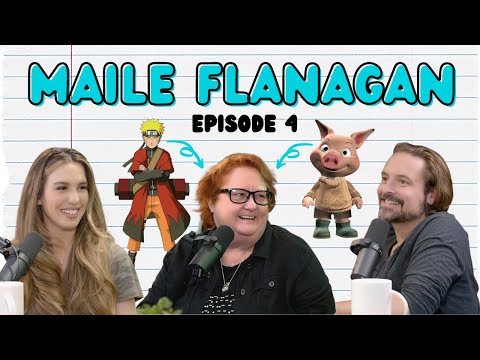 Join our Patreon to get first dibs to be on the podcast + get ad-free episodes, exclusive content, and much more! https://www.patreon.com/ihearvoices ...