admin
The War of Werewolf (2021) thriller movie explained in Hindi Urdu voice over. The Chinese Thriller Adventure film “War of Werewolf: Superpowers Creature” story summarized with a full ending in हिन्दी explanation. The plot is about a lead character "Lang Joon" who inherits the tribe superpower of a werewolf. Unfortunately, his father and mother are no more. Once, he encounters an incident while working on the delivery of the goods. He meets a boy in a car and there his werewolf powers are transferred to him. He then learns that he is turning into a werewolf as time passes, gaining superpowers. Actually, it was inherited but he was unaware of this. His uncle plays here as an antagonist as he is his father's killer but no one knows it until the end. When it is revealed that Lang Joon's father had the talent to create a medicine that can cure all diseases. It is then revealed that there is a company that is searching for "Lang Joon" for their experiment because he has a werewolf inside.

Finally they approach him. It was also the same company where Lang Joon's father and uncle worked. In the end, "Lang Joon" learns that it is his uncle who killed his father for stealing his powers and drags him into disaster when he forbids to trade illegal chemical weapons with foreigners. In the end, a big fight ensues between "Lang Joon" and his uncle and both of them masquerade as werewolves.

But "Lang Joon" along with his friend kills his uncle with an electric shock he meets his death. And "Lang Jun" also reveals the truth of this company that was being manipulated by his uncle. In my view this Half-Wolf Legend is both amusing and scary to watch. With its best and unique storyline and devastating adventures throughout the film, this movie satisfies the super monster or beast creature fan for sure.

Disclaimer: Any footage in this video has only been used to communicate a message (understandable) to the audience. According to my knowledge, it’s a fair use under reviews and commentary section. We don't plan to violate anyone's right. Thanks. 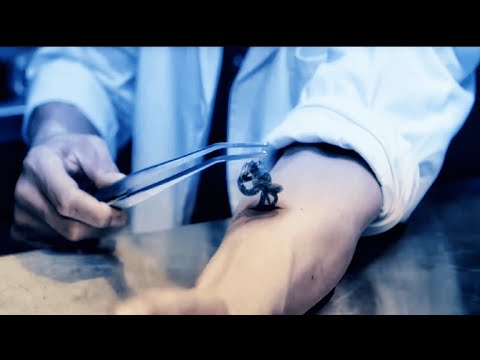