admin
Tom and Jerry: The Lost Dragon (2014) Animated movie explained in Hindi Urdu. The American Fantasy animation-Comedy film Tom and Jerry Lost Dragon ” story summarized with a full ending in हिन्दी explanation. The plot revolves around an egg of a fire dragon was discovered by both Tom (cat) and Jerry (Mouse), who were the pet animals of the witch's niece. There was a village where a witch lived, but she harmed everyone, so the magician expelled her. There was also her niece, but the magician didn't say anything to her because she was older. But the villagers dislike the witch's niece because they believe she will be like her. The witch has sent her cats to bring the pearl-shaped egg, which is the egg of a dragon, but the cats did not take it, so she punished them. Tom and Jerry present the egg to their owner, who is pleased and says to Tom, "Warm it like the chicken." Tom does the same, and a baby dragon emerges from the egg, calling Tom "Mama."

The magician is enraged and plans to kill her, but she is dominant on him and captures the fir of the Fire dragon. However, the witch's niece arrives with her pets and ends the witch by breaking its gem. With the help of her pets, the witch turns into a stone, and the baby dragon and the fire dragon are resurrected. The villagers were overjoyed because the witch's niece had always taken care of them. They decided that now the witch's niece and her pets would live with them, and this was the ending scene. 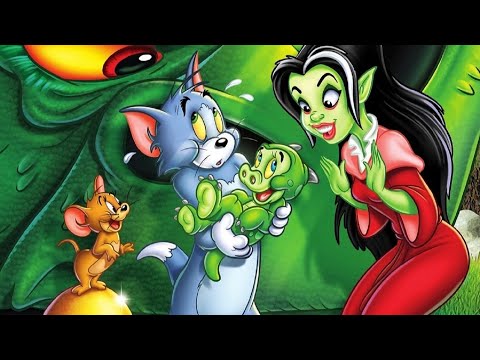