TOP 10 CARTOONS of ALL TIME

Animation is a powerful form of media. Most people have a cartoon that sums up their childhoods. They made Saturday mornings worth waking up for and they put that extra spring in your step as you rushed home from the bus stop after school. Today, I’m going to give you my take on the Top Ten Greatest Cartoons of all time.

Number 10: Kim Possible (2002)
While Kim Possible may not be the most iconic cartoon of all time, the reason it made this list for me is because of its positive impact on young women. At the time of Kim Possible’s release, the majority of cartoons featured male characters in the lead roles, and if you looked at more action-oriented cartoons, nearly all of them had male leads. Then came Kim Possible.

Number 9: X-Men: The Animated Series (1992)
While the animation was spotty in some places (especially in earlier episodes), the voice acting and stories made up for it. X-Men tackled some of Marvel Comics most iconic storylines and, arguably, did them better justice than their cinematic counterparts.

Number 7: Looney Tunes (1930)
Growing up in the 90’s I fell more into the Space Jam age of Looney Tunes (no regrets by the way), but I have so many memories of my dad sitting me down and showing me the classics. What I really respect about Looney Tunes is that when I watched it with my father, not only was I enjoying the zany humor of Bugs Bunny, Daffy Duck, and Wile E. Coyote, but my dad was genuinely laughing at the jokes put there for adults too.

Number 6: The Simpsons (1989)
The Simpsons had an absolutely incredible ten season run. I recently rewatched the series while stuck in quarantine and looking for a pick me up. I started from the very first episode and I was hooked all over again. The comedy was witty, the jokes made me laugh out loud alone in my house. Every character (and that’s a lot) had their niche and tickled my funny bone in their own special way. That said, around season thirteen, I found myself beginning to lose interest. The jokes weren’t as funny anymore and a lot of the characters had devolved from the classics that they once were. That was EIGHTEEN seasons from where they are now.

Number 5: Justice League (2001)
Justice League made you think while also exposing you to some excellent action, witty banter, and some of the best versions of these superheroes that we’ve ever seen. The theme song incapsulates the grandeur and action you’re in for while doing a similar job to X-Men, showcasing its main cast. Justice League really had something for everyone and allowed boys and girls to find role models in each of its characters while genuinely being entertained for twenty-two minutes. If you haven’t seen it, I highly recommend you do, whether you’re a DC fan or not.

Number 4: Animaniacs (1993)
The intro to Animaniacs is funny even before the show starts and the tune is incredibly catchy. Couple that with some hilarious and intelligent musical numbers and the show is really something unique. The Warner siblings also had a great supporting cast that each dabbled in their own unique form of comedy.

Number 3: Spongebob Squarepants (1999)
The Meme Lord himself. No cartoon list would be complete without Spongebob Squarepants. Spongebob is an entity. Somehow a show about an anthropomorphic sponge and his friends (which include a sea dwelling squirrel in a scuba/astronaut crossover outfit) has remained at the peak of animated excellence for the twenty-one years.

Number 1: Avatar: The Last Airbender
Water, earth, fire, air, long ago those four words latched onto me and anchored me through the most exhilarating television experience to date. Avatar: The Last Airbender is easily one of the best things you will ever watch. It has heart, humor, and action and delivers it all through the most amazing, three-dimensional cast of characters. You’ll remember that I excluded all Anime from this list as I felt it deserved the genre deserved its own list. Avatar is American made and is widely regarded as a cartoon and not an anime.

TOP 10 CARTOONS of ALL TIME 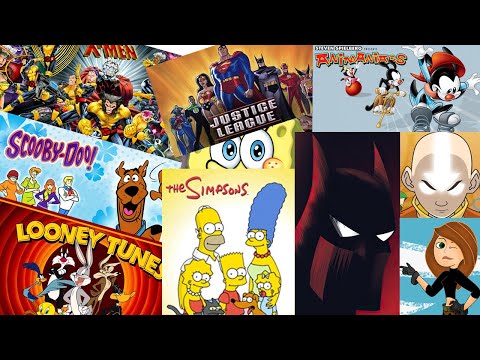 Top Ten Cartoons of All Time Animation is a powerful form of media. Most people have a cartoon that sums up their childhoods. They made Saturday morni...