DreamWorks Animation LLC (also simply known as DreamWorks) is an American animation studio that produces animated films and television programs and is a subsidiary of Universal Pictures, a division of NBCUniversal, which is itself a division of Comcast. The studio has released 41 feature films as of July 2021, including several of the highest-grossing animated films of all time, with Shrek 2 (2004) having been the highest at the time of its release. The studio's first film, Antz, was released on October 2, 1998 and its latest film was The Boss Baby: Family Business, which was released on July 2, 2021; their upcoming slate of films include The Bad Guys on April 22, 2022, and Puss in Boots: The Last Wish on September 23, 2022.

Formed as a division of DreamWorks Pictures in 1994 with alumni from Amblin Entertainment's former animation branch Amblimation, it was spun off into a separate company in 2004. NBCUniversal acquired DreamWorks Animation at a cost of $3.8 billion in 2016. The studio originally made some traditionally animated films, as well as two stop-motion co-productions with Aardman Animations, but now exclusively relies on computer animation. Its productions, including The Prince of Egypt, Wallace & Gromit: The Curse of the Were-Rabbit, and the Shrek, Kung Fu Panda and How to Train Your Dragon franchises, have received several accolades, including three Academy Awards, 41 Emmy Awards, numerous Annie Awards, and multiple Golden Globe and BAFTA nominations.

Films produced by DreamWorks Animation were originally distributed by DreamWorks Pictures until 2005, which was then taken over by Paramount Pictures in 2006 until 2012. 20th Century Fox (now 20th Century Studios) became the third distributor in 2013 and held the position until 2017. Universal Pictures became the fourth and final distributor and holds the position since 2019, as well as owning most of the rights to its back catalogue.


Hope you like the video. As always, thanks for watching! 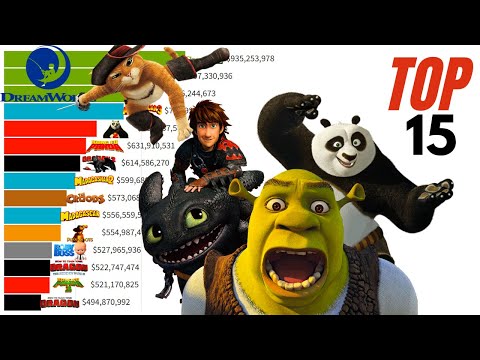